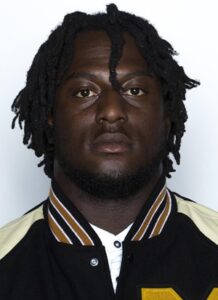 University of Missouri junior defensive tackle Terry Beckner Jr., has elected to return for his senior year and complete his eligibility with the Mizzou Football program, as announced today. The East St. Louis, Ill., native will not enter his name for early entry into the 2018 NFL Draft.

“I’m excited to make this decision and move on to finishing this season out the right way,” said Beckner Jr. “We have a chance to do something really special and keep momentum going into next year, and I want to be part of that and help lead this team in the right direction. I love Mizzou, and I’ve grown so much this year working with Coach (Brick) Haley, but there’s so much more that I can learn from him. I’m really grateful for the opportunity to be a Tiger and I want to do everything I can to help us do big things,” he said.

“We’re very excited to know that Terry will be with us for another year,” said Head Coach Barry Odom. “Everyone knows that he’s a high-impact player, but even more so, he’s an incredible leader for this program and is an outstanding representative of Mizzou. He certainly did have an opportunity to move on, but he and his family weighed all of the factors and we’re grateful for the faith they have in us as a coaching staff to help him become the best he can be. It’s also very important to Terry and his family that he earns his degree, and he’s on pace to do that. We’ve got something special going at Mizzou, and he’s a big part of it,” said Odom.

Beckner Jr. has emerged as one of the nation’s top interior linemen in 2017, and he’s been credited as a major leadership source for the team that has earned national attention for its six-game win streak to end the regular season after a 1-5 start. Beckner has amassed seven quarterback sacks through 12 games in 2017, a figure which ranks fifth in the Southeastern Conference among all defenders, and tied for first among tackles. For the season, he’s registered 35 tackles, including 10.5 tackles for loss, five quarterback pressures, two pass break ups and one interception.