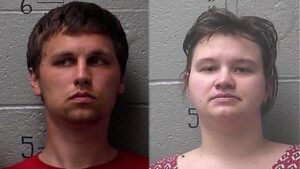 A couple from eastern Missouri’s Park Hills is accused of heating up their baby in a microwave and dropping the baby while trying to imitate a TV commercial. St. Francois County Prosecuting Attorney Jerrod Mahurin says the child continues to recover from injuries after being taken to an emergency room in April.

“It appears that there was first-degree, second-degree burns on the child. It looks like there were cranial fractures. There may be continuing and ongoing rehabilitation for this child,” says Mahurin.

He says this is one of the worst child abuse cases that he’s seen as a prosecutor.

“I’ve been doing this for quite a while now, like a long time. When you think you’ve seen everything, you get surprised and it’s often not a good surprise. This child abuse case was one that I think shocked everybody in my office,” says Mahurin.

22-year-olds Derick and Mikala Boyce-Slezak are in jail on charges of felony abuse or neglect of a child. Their bond is set at $500,000 cash only. They’ll be arraigned on Tuesday.

By Mark Toti of Missourinet affiliate KREI in Farmington