All of Missouri’s Republican U.S. House members had the rare experience yesterday of traveling with President Donald Trump on Air Force One. For the second time since August, the president came to Missouri to gather support for a GOP tax plan moving through Congress. Trump addressed a crowd of about 1,000 people in St. Charles on Wednesday. 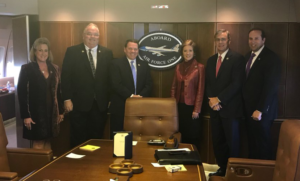 West-central Missouri Congresswoman Vicky Hartzler is humbled by the experience of traveling with the president on Air Force One.

“I’m a farm girl from Archie. My husband and I still farm. This small town girl never thought I’d have this opportunity and so I feel very honored and privileged,” said Hartzler.

She called Missourinet from the president’s plane.

“There is a communications ability here as well in the event that the president needs to communicate and make decisions,” said Hartzler. “It has a lot of capabilities that I’m not even sure I’m aware of.”

“I didn’t sit on the plane that much because I kept walking around all three levels,” said Smith. “I just a country kid from southeast Missouri and I come from a family that’s not political. My dad was a mechanic and my mother worked on the assembly line.”

Smith says one section of the plane is for the press. Security and staff sit in another section. The plane also includes a conference room and an office for the president.

He called his mother from Air Force One.

The U.S. Senate is debating the tax legislation and could vote on the measure Friday. The House has passed its version.