You are here: Home / Legislature / It’s official: Right to Work law to go before Missouri voters

Missouri residents are set vote on whether to keep or sack Missouri’s new right to work law. 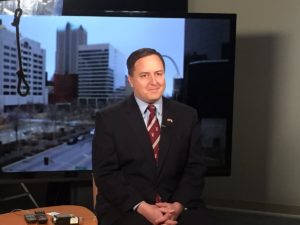 Secretary of State Jay Ashcroft announced Wednesday that he’s certified a ballot measure for next November’s election, unless state lawmakers assign it to a different date.

The law allows employees to opt out of joining unions in work places where the organizations bargain for their pay and benefits.

The legislation flew through the Republican dominated state legislature, and was quickly signed by GOP Governor Eric Greitens this year.  But it was effectively suspended when unions collected enough signatures to get the law placed before voters to approve or reject it.

A lawsuit to block the union effort by pro right to work interests was rejected in court.  Ashcroft has now confirmed that enough of the signatures collected are valid, which makes the process official.

The unions submitted well in excess of 300,000 signatures for review by Secretary Ashcroft’s office in August.  The number of valid signatures required to reach a public vote is roughly 100,000.

Those signatures must total 5% of votes cast in the last governor’s election in six of the eight Missouri Congressional districts.  The union signature gathering effort was robust, with 250,327 surpassing scrutiny for certification.

The breakdown of each Congressional district reveals regions of the state where union support is strong or weak.  The districts with the most signatures submitted contain large unionized automotive plants.

There were 50,273 signatures from District 5, which is home to the Ford Kansas City Assembly Plant in Claycomo.  The district is represented in Congress by Democrat Emanuel Cleaver.

50,017 signatures were submitted from District 3, which is home to the GM Wetzville Assembly Center outside St. Louis.  45,570 of the signatures submitted were from District 1, the home of Democratic Congressman William Lacy Clay and the city of St. Louis, which has historically had a strong union presence.

43,847 signatures were collected in District 3, which encompasses most of St. Louis County.  (A complete breakdown of the 8 Congressional districts is posted below).

The secretary of state’s office has scheduled a vote on the right to work law for the November 6, 2018 election.  Republicans lawmakers could try to move the vote to April, when turnout at the polls is much lighter.

Unions and Democrats will likely want to keep the law on the November ballot, when their supporters are more likely to show-up.  The November date could also serve to shore up backing for Democratic U.S. Senator Claire McCaskill, who’s involved in tight reelection that’ll take place on that ballot. 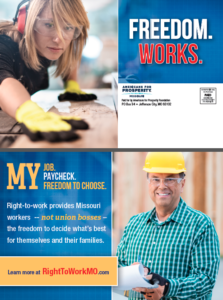 Several interest groups have vowed to spend heavily on the right to work referendum.  The Koch Brothers funded Americans for Prosperity Foundation has recently financed a six-figure ad campaign in support of the law.

The Missouri Chamber of Commerce has also indicated it will throw a large sum amount behind the law.  Chamber President and CEO Dan Mehan thinks the amount of money spent on both sides of the issue will be staggering.  “I think the total cost of this campaign for either side will be upwards of $10 million and more,” said Mehan.

The public vote being sought over the right to work law is known as a ballot referendum, which has taken place 26 times since 1914, the last time in 1982.  The issue at that time was whether maximum weight and length of large trucks would be increased.  The law was rejected by voters.

Missourians rejected a ballot proposal to implement a right to work law in 1978, with 60% casting no votes.

The following is breakdown of signatures collected for the right to work ballot referedum by Congressional District: