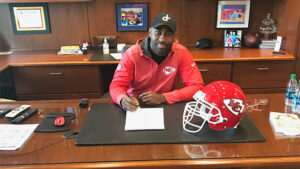 “Darrelle is a proven player in this league and we are excited to add him to our secondary,” Chiefs General Manager Brett Veach said. “He’s had a Hall of Fame career and his leadership and playing experience will be valuable to our defense.”

“We’re excited to add Darrelle to the roster,” Chiefs Head Coach Andy Reid said. “He has experience and familiarity with Bob Sutton’s defense, he’s a team guy and we feel like a player of his caliber can help our football team.”

The Aliquippa, Pennsylvania, native played collegiately at Pittsburgh before being drafted by the New York Jets in the first round (14th overall) of the 2007 NFL Draft.