A western Missouri lawmaker is warning about the growing danger and costs from diabetes. 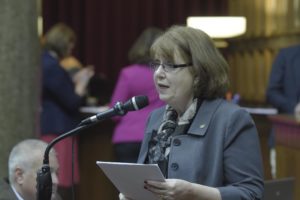 State Rep. Patricia Pike speaks on the Missouri House floor in May 2017 (photo courtesy of Tim Bommel at House Communications)

State Rep. Patricia Pike, R-Adrian, says more than 747,000 Missourians suffer from the consequences of diabetes, adding that the cost to Missouri is more than $4.8 billion annually.

The Adrian Republican says unmanaged diabetes is the cause of blindness, kidney failure and amputations in adults, and is a leading cause of heart disease and stroke.

Pike and health care experts from across Missouri will brief reporters and the public Tuesday morning at 10 at the Statehouse in Jefferson City.

Pike will also outline her legislative efforts to reduce the diabetes rate among older Missourians.

She says one-third of people 65 and older have diabetes.

Those interested in more information about Tuesday’s Statehouse presentation on “World Diabetes Day” can call Representative Pike’s Capitol office at (573) 751-5388.