(NASCAR)—Former NASCAR champion Matt Kenseth has gotten one more taste of victory in the twilight of his career.  Kenseth grabbed the lead from Chase Elliott with nine laps to go at Phoenix and beat Elliott to the finish by 1.2 seconds, ending Elliott’s hope of making the championship shootout next week at Homestead-Miami. It’s Elliott’s seventh runner-up finish. He’s still looking for his first win.

Elliott had to win to be one of four drivers going for the 2017 title.  Kenseth was knocked out of the playoffs in the second round when too many members of his pit crew went over the wall during a pit stop, a rules violation that led to his immediate withdrawal from the race.

Kenseth’s win, Elliott’s second place, and Denny Hamlin’s flat tire that put him into the wall after close racing with Elliott let Brad Keselowski join the final four despite his sixteenth-place finish.  He joins other past champions Kevin Harvick and Kyle Busch and season points leader Martin Truex Jr., as the only four drivers eligible to take the championship in the season’s final race.

Joplin’s Jamie McMurray regained his mid-season form after a series of disappointing finishes, running in the top five most of the day and coming home sixth.

Kenseth won the NASCAR championship in 2003.  His win at Phoenix is the 39th of his career.  He learned midway through the season that he would be replaced Erik Jones in his Joe Gibbs Racing car next year.  At 45 years old, he found no top-level teams willing to offer him a new ride for 2018 as NASCAR’s young guns such as Elliott, Jones, Suarez and Larson establish themselves as the sport’s future.

Seven-time champion Jimmie Johnson, who also had to win at Phoenix to keep his hopes alive for a record eighth championship, crashed less than halfway through the race and finished thirty-ninth in the forty-car field.

(FORMULA 1)—Sebastian Vettel has picked up his first win since July, taking the lead from pole sitter Valtteri Bottas at the start and never giving it up.  Bottas came home second, providing Mercedes meat in a Ferrari sandwich, with Kimi Raikkonen claiming the last podium position.

Lewis Hamilton, who wrapped up the season championship in the last race, started from the back of the field because of a crash in practice.  He sliced his way through the pack, led briefly while the other leaders made pit stops, and threatened Raikkonen but locked up his brakes on a turn and could not regain the lost ground.

The F1 season ends in two weeks in Abu Dhabi. 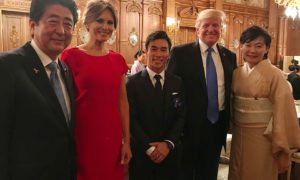 Sato was invited to the state dinner given by Japanese Prime Minister Shinzo Abe and his wife for President Trump and his wife at the official Japanese guest house, Akasaka Palace. Sato became the first Japanese driver to win the 500 last May.

Sato knows his way around Twitter, too.  He tweeted at the dinner that he actually is the second Japanese winner at the Speedway, nothing that golfer Isao Aoki won a PGA tour event on the Speedway’s golf course in 1994.