The Korean War – often called the “forgotten war”- is far from forgotten by 91-year-old Leonard Adreon, who has written a vivid memoir describing his time there in 1951. During the St. Louis native’s year as a war medic, he fought to save lives while battling the Chinese on the hillsides and hilltops at the 38th Parallel in Korea.

He remembers his drill sergeant saying “Don’t get too close to anybody.” Adreon lost about two dozen friends during the conflict. About 36,000 Americans died, 103,000 were wounded and nearly 7,800 soldiers are listed as missing in action from the 37 month war.

Adreon stayed silent about the conflict for 60 years because he made an agreement with his war buddies to put Korea behind them. Even his wife of 60 plus years didn’t push him to open up about his experience.

“We reached a consensus: We should focus on the future. We did not exchange telephone numbers. We did not exchange addresses. We said there will be no reunions and it was forever goodbye,” says Adreon. “I think it was probably a healthy thing to do. I read about all of these people coming back from Iraq or Afghanistan and having post-traumatic stress syndrome because they relive what happened and the carnage and the blood.”

When Adreon retired from a successful real estate career, he stayed engaged by taking classes at Washington University. He was a guest speaker at the school for a class about the Korean War. Adreon’s appearance that was supposed to last about 15 minutes, turned into a three week commitment. The students were fascinated with his stories and couldn’t get enough of them. 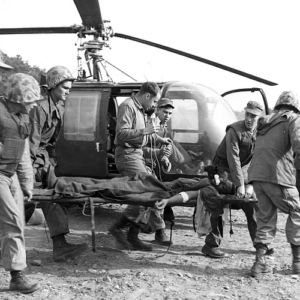 “Something that astonished me in that class and that is my memory of what happened there was very crisp, very vivid, very clear,” says Adreon.

He saw a reoccurring theme involving blood baths and the blank stare of death in front of his eyes. He could feel the vibrations of the explosions. He could see the faces. He heard the voices.

Washington University faculty and his classmates in a writing course urged Adreon to write a book that reflects on his time in war. At first, Adreon resisted the idea.

Then he began to think about his dear friends who tragically died on the battlefield in his presence: Big Mike, Sammy, Sgt. Jimmy and Derry. He wanted to honor his friends he fought with. His about-face has led to the birth of Hilltop Doc: A Marine Corpsman Fighting Through the Mud and Blood of the Korean War.

Another main reason Adreon wanted to write the book is to spotlight the importance of the “forgotten war”. He says he takes great exception to those who argue that the Korean War did not accomplish anything. 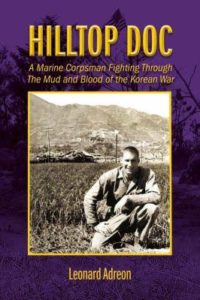 “There are 50 million people living in South Korea in freedom and in relative prosperity, compared to 25 million miserable, impoverished North Koreans under Kim Jong Un,” says Adreon. “If we had not interceded in that war and we hadn’t saved South Korea, Kim Jong Un would have the whole peninsula today and the menace that he is would be an even greater menace.”

According to Adreon, another war on the ground in Korea should be avoided. He thinks a peaceful solution must come through China making North Korea’s dictator give up his weaponry in exchange for guaranteeing his safety.

Adreon says he hopes those who read his book will learn that the U.S. should find a way to avoid another war with Korea.