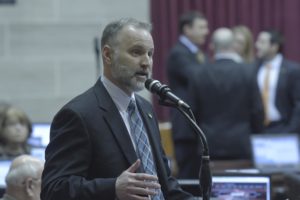 Hood testifies the guard cable has saved more than 500 lives.

Missouri has the seventh-largest state highway system, with 33,884 miles of roadway.

The Neosho Republican says his vehicle hit “black ice” on the highway, while he was traveling to the Capitol about five years ago. He credits the cables for helping to save him.

Guard cables were just one of numerous safety issues discussed at the hearing.

“People, they’re still driving intoxicated, they’re not buckling up, they’re texting while they’re driving, they’re speeding and unfortunately sometimes those fatals are a result of all three of these,” Hood says.

Missouri is one of 16 states without a primary seat belt law.

Missouri Department of Transportation Director Patrick McKenna describes texting while driving and other forms of distracted driving as an “epidemic.”

“And while we’re reluctant to have additional governmental influence or control-type measures, we have to have counter measures to this epidemic,” McKenna tells the task force. “It’s killing, you know, or contributing in the deaths of over 40,000 people a year in this country.”

McKenna says MoDOT employees are not allowed to text and drive, while on duty.

He also says 250 Missouri companies have signed up to ban their employees from texting and driving, while on duty.

The task force will submit its recommendations to the Missouri Legislature by January 1.

Funding will be a key recommendation.

Missouri’s fuel tax hasn’t been increased since 1996, and the Show-Me State ranks 47th in the nation in revenue per mile.