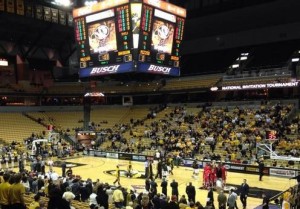 With the prospects of Michael Porter Jr. and the 7th ranked recruiting class for 2017-18 taking Norm Stewart Court this season, Missouri Tigers fans will be filling up Mizzou Arena on a regular basis after the athletic department announced on Tuesday that season tickets are officially sold out.

Head coach Cuonzo Martin believes this will give his young team a distinct advantage at home.

“The response from Mizzou fans and the excitement here in Columbia and around the state of Missouri has been outstanding,” Martin said. “Our home court advantage has the potential to be tremendous, so we’ll need Mizzou fans night in and night out. Whether it’s a Saturday in December or a Tuesday night in February, our program will work to do its part. We can’t wait to see you all there with us every step of the way.”

Mizzou Arena holds 15,061 fans, and Mizzou Athletics has sold 15,600 season tickets to date, including 6,028 student combo tickets which are good for both Tiger men’s basketball and football games.  The athletic department will typically oversell in the student section to accommodate “no-shows.”

“We are looking forward to seeing the excitement and energy at Mizzou Arena this season, and are extremely grateful for all Mizzou fans who have purchased season tickets for the upcoming season,” said Mizzou Director of Athletics Jim Sterk. “I am confident that our fans will provide the Tigers with a tremendous home court advantage this winter.”

·   Kentucky was the favorite to win the 2018 SEC championship in a preseason poll of media from around the league and nation. Florida’s picked to finish second and is followed by Texas A&M, Alabama and Missouri. There was a three-way tie for Preseason SEC Player of the Year between Yante Maten (UG); Michael Porter, Jr. (MO); Robert Williams (AM).

·   Eight players ranked in the Top 25 of ESPN.com’s Class of 2017 rankings signed with SEC schools, including three of the top 10 players in the class.

·   Over the last seven NBA Drafts, 53 SEC players have heard their names called. Thirty-one of those were selected in the first round and four were the No. 1 overall pick.