(NASCAR)—Two former NASCAR Champions and this year’s points leader have guaranteed they’ll have a chance to run for this year’s title.  Next year’s race at Phoenix will determine whether another former champion will fill that position

Kevin Harvick’s win at Texas has guaranteed he’ll be in the field. Kyle Busch’s victory last weekend locked in his place.  Martin Truex Jr., has a big enough points lead that he cannot be left out.

Harvick passed Truex with nine laps to go to win at Texas, his second victory of the year. Truex was 1.5 seconds back.

Harvick won the championship in 2014, a year ahead of Kyle Busch.  The 2012 champion, Brad Keselowski, has the fourth position by nineteen points over Denny Hamlin .  Hamlin will have to finish far enough ahead of Keselowski, including bonus points awarded to positions at the end of each stage of the race, to become the fourth competitor.

A win by either of those two, or the other three remaining competitors—Dave Blaney, Chase Elliott, and Jimmie Johnson would qualify them for the final runoff.  Last year’s champion, Jimmie Johnson, is 51 points behind the fourth playoff spot. 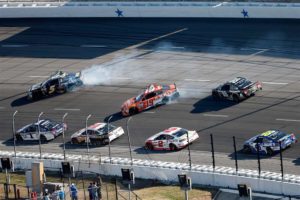 Joplin’s Jamie McMurray could do no better than eighteenth in the race. He (1) and Bowyer (14) went low on the track to avoid the wrecking cars of Kasey Kahne (5) and Daniel Suarez (19) on the 94thth lap of the 224-lap race.  Adopted Missourian Clint Bowyer was 36th, still running at the end but thirty-one laps behind the leader.

Previous Post: « Rountree to Hall — “That was your touchdown” #Mizzou
Next Post: Missouri lawmaker wants to raise minimum wage to $15 an hour (AUDIO) »