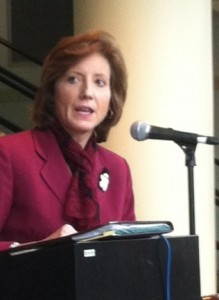 Republican Vicky Hartzler told Missourinet Columbia affiliate KSSZ that the diversity visa lottery which allowed Uzbek immigrant Sayfullo Saipov into the country seven years ago must be done away with.

“We’re going to take the steps needed, especially after what happened in New York City, and hopefully help avoid a future tragedy of this type,” said Hartzler.

The lottery, which allows as many as 50,000 visas to be issued every year, dates back to 1990.  Anyone can enter the fast track sweepstakes into the country, and unlike other immigrants, lottery winners don’t have to have a close relative living in the United States, or any special skill.

The program has its roots in the 1960’s when changes in the immigration law no longer favored Europeans, but instead focused on family reunification.

A congressman of Irish descent backed a successful effort in 1986 to pass a temporary law allowing entrance into the U.S. for people adversely affected by Irish property rights changes.  The law become permanent in 1990 and has been in place ever since.

Many Democrats criticized President Trump for focusing on immigration reform so quickly after the New York attack, noting he refused to talk about gun laws after a shooter killed 58 people in Las Vegas a month ago.

Wednesday night, Trump tweeted “NYC terrorist was happy as he asked to hang ISIS flag in his hospital room. He killed 8 people, badly injured 12. SHOULD GET DEATH PENALTY”.

Many Republicans, including Missouri’s Hartzler, are renewing calls to step up vigilance against terrorist group’s such as ISIS in the days after the New York attack.  The 4th term U.S. House Republican told KSSZ she’d like to see Homeland Security keep an eye on web sites that are known to push ISIS propaganda.

“We should be proactive and monitor those sites and those individuals who are sending those messages and radicalizing people within our own borders,” Hartzler said. “There’s lots of people who have gone to other countries in support of ISIS and then realized what an awful life it is and have come back. Those stories need to be told.”

There may be political safety for elected Republicans from Missouri to align themselves with President Trump.  After winning the state by 19 points in the 2016 election,  Trump still has a positive approval rating in Missouri, according to a recent Remington Research poll.