(NASCAR)—Pushing, shoving, and rubbing lead to  a wild overtime finish on the Martinsville half-mile (actually .526 mile), with Kyle Busch surviving for the win.  Busch crossed the finish line .141 seconds ahead of the season points leader while several cars wadded up in a front-stretch crash as the leaders got the checkered flag.

The win guarantees Busch, the 2015 champion, a place in the final championship race at Miami’s Homestead Speedway in three weeks. 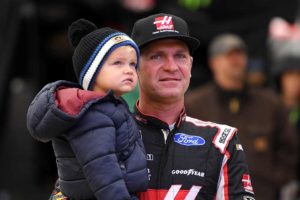 Our “adopted” Missourian, Clint Bowyer (with son Cash in the garage area) was third.  Joplin’s Jamie McMurray had his third straight poor finish.  He crashed in the two preceding races at Talladega and Kansas, taking himself out of the running for this round of the playoffs.  Early problems at Martinsville dropped him out of contention.  He was running at the finish but was two laps down at the finish, 29th.

The series moves to the Texas Motor Speedway next weekend.

(FORMULA 1)—Lewis Hamilton’s ninth-place finish in the Mexican Grand Prix was good enough to sew up his fourth Formula 1 championship.  The race was won by Max Verstappen, who finished twenty seconds ahead of Hamilton’s teammate Valterri Bottas.

But the two points Hamilton won by coming back from a first lap flat tire in a first-lap brush with top rival Sebastian Vettel (who finished fourth) was enough to guarantee Vettel cannot catch him even with victories in the last two F1 races of the year.

The championship is Hamilton’s fourth, tying him with Alain Prost and Vettel.  Only Juan Manuel Fangio, who won five titles in the 1950s, and Michael Schumacher, with seven, are ahead of him.  The fourth championship makes Hamilton the most successful United Kingdom driver in Formula 1 history with one more title than Sir Jackie Stewart.

F1 finishes the season with races in Brazil and AbuDhabi.

(INDYCAR)—IndyCar CEO Mark Miles continues to speak carefully about the possibility of IndyCar racing in Mexico next August, but reports indicate the deal is about sealed. Open-wheel cars last raced at the track in 2007, during the years when the Indy Racing League and Champ Car were split.

Chip Ganassi Racing has signed hot young talent Ed Jones as the 2018 teammate of longtime CGR driver Scott Dixon.  Jones, who is from Dubai, will take the seat that had been occupied by Tony Kanaan.  Jones was this year’s IndyCar Rookie of the year driving for Dale Coyne Racing.

And for those who savor the traditions of the Indianapolis 500: The Speedway has announced that Jim Cornelison will return to sing “Back Home Again in Indiana” for the 2018 race. Cornelison, who performs the national anthem before Chicago Blackhawk games, was an instant hit this year performing the song that Jim Nabors had sung for decades.  You can re-live his first performance here:

Some think Corneilson’s rendition was reminiscent of the Nabors version but with his own touch.  Here’s Jim’s thirty-sixth and final appearance in 2014.