The Missouri Supreme Court heard an appeal Wednesday in Jefferson City from a convicted killer, who brutally beat a 19-year-old man and left him in a field as he chanted the words to a rock song seven years ago. 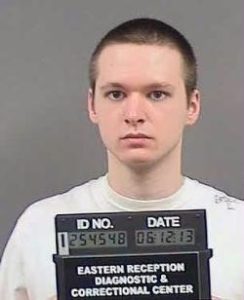 Keith Meiners of Overland was 21 when he was given a 25-year sentence for second-degree murder for the death of James “JJ” Willman in 2010.

According to court records, Mr. Meiners was drinking at home one night with several people along with Willman, who he had invited over.  Willman had been the boyfriend of Danielle Buhrman for over two years before she started dating Mr. Meiners four months earlier.

In documents prepared by the state for the Supreme Court, Meiners handed Willman a drink that had been laced with crushed-up pain killers and said, “If you’re a man, you’ll down this”.

Later Meiners, Justice Brickey and Willman agreed to go out on their own, and after a series of stops, ended up at a party.  There, Meiners told Willman he wanted to meet his sister at a gas station, and the three left in Willman’s vehicle.  Shortly afterward, Willman pulled over so Brickley, who was drunk and felt sick, could throw up.

According to court documents, Meiners was strangling Willman with duct tape as Mr. Brickley was heaving.  Brickley got out of the car as Meiners pulled Willman out of the driver’s seat onto the ground.

Meiners stomped and punched Willman, who was covered in blood, until he was no longer moving or making a sound.  Meiners and Brickley moved Willman off the road, but Brickley had to throw up again.

It’s not clear what exactly happened next, but the two men ultimately left in Willman vehicle, which they parked at a Missouri Welcome Center.  After walking to a convenience store, they were picked up by associates who they hung out with until sometime after midnight.

The next morning, one of the female associates asked Meiners if Willman had gotten home OK.  Meiners told her no, and eventually told her that he had killed Willman by beating and stomping him while singing the 2008 rock song “Ain’t No Rest for the Wicked”.  Meiners said he stood on Willman’s throat until he could not feel his pulse.

After he was reported missing, police investigated and, with the help of a K-9 unit, found Willman’s body roughly two-and-a-half weeks later in a field of tall grass.  His hands and wrists were behind his back, bound with duct tape.

Police also located Willman’s vehicle at the Welcome Center and seized video surveillance from the center and the convenience store Meiners and Brickley had walked to.

In the weeks after Willman’s disappearance, Meiners laughingly admitted to Buhrman  – the former girlfriend of Willman before she started seeing Meiners – that he killed Willman by beating him.

A St. Louis County jury found Meiners guilty of second-degree murder three years after the incident.  An appeal court upheld the conviction in 2014.

The Missouri Supreme Court will consider whether a jury that convicted Meiners should have had the option to also consider the lesser crimes of voluntary and involuntary manslaughter.

Meiners’s attorney in the high bench case claims that his appeal’s court lawyer was ineffective because she failed to call out the trial court for disallowing manslaughter convictions.  At the time, his trial attorneys had tried to convince the lower court that the evidence supported the inclusion of the lesser crime for consideration.

Interestingly, not long after the Meiners appeal, the state high bench issued a decision in a robbery conviction that many of the parties in the Meiners case think would have likely resulted in the manslaughter options being included.

The attorneys and the Supreme Court judges seems perplexed Wednesday about what would be the next step if the high court determined that Meiners appeals court counsel had been ineffective.  No one seemed to be sure which court would hear the remanded case and what the instructions from the judges would be for further proceedings.

When quizzed about the the issue by the judges,  Meiners attorney Lisa Stroup sighed in frustration and said, “I hate to say I’m not sure.”

The Meiners appeal was one of five cases the Supreme Court heard Wednesday.  It’ll issue its decision in a hand down at a later date.

Meiners is currently incarcerated in the Eastern Reception Diagnostic and Correctional Center in Bonne Terre.