(NASCAR)—Joplin’s Jamie McMurray had to win at Kansas to advance to the next round of the NASCAR playoffs and stayed in position to challenge for the lead in the closing laps—but never got to the closing laps. 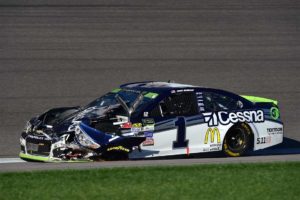 His teammate, Kyle Larson, who was well-positioned to move on to the third playoff round going into the race, lost an engine after seventy-three laps, and finished thirty-ninth, so far back that he also failed to make the third round.  The two Ganassi Racing teammates are joined by Matt Kenseth and Kasey Kahne as the four drivers who did not advance beyond the second round.

Martin Truex Jr., battled back from an early penalty to win the race by almost 2.3 seconds, a large margin in NASCAR terms, over Kurt Busch.  The win was an emotional one for Truex and the Furniture Row Racing team after the death Saturday night of James Watson, a road-crew fabricator for the team.  He was 55.

(Formula1)—Lewis Hamilton hasn’t nailed down his fourth F1 championship but the hammer and nails are within arm’s reach.  Hamilton picked up his ninth win of the season at the Circuit of the Americas near Austin, Texas and moved to a sixty-six point lead over Sebastian Vettel.  Three races are left in the season, including next weekend’s race in Mexico.  Each race is worth twenty-five points to the winner.

Vetel was second in the USGP. He beat pole-sitter Hamilton to the first turn on the start but Hamilton quickly took charge and won by ten seconds.  Red Bull driver Max Verstappen finished third after charging from a sixteenth starting slot and was irate when he was told before competitors took their positions on the podium that he had been penalized five seconds by race stewards because he went slightly off course making a late-race pass on Kimi Raikkonen.  Verstappen called the penalty “stupid” and said such decisions will “kill the sport.” Raikkonen was awarded third and Verstappen fourth.

The dismal season of two-time F1 champion Fernando Alonso continued.  “I think I have an engine issue.  I can’t believe it,” he said on his car’s radio, dropping out after twenty-five laps and finishing seventeenth in the twenty-car field.  Alonso has eleven DNFs this year, has finished on the leader’s lap only twice and has been in the top ten only twice in seventeen races. He has run only 695 of 921 laps in this year’s races.  And that bring us to—

(IndyCar)—Fernando Alonso says he will be back for another shot at the Indianapolis 500.  Not next year because his McLaren team is try a new engine supplier (Renault replaces Honda), which means he is not likely to be back with the Andretti team, which runs Hondas.  Interviewed at the USGP, he confirmed the 500 is in his future. “I don’t know if it will be 2019 or 2020 or whenever, but it’s a race that I definitely will experience again.”

This year’s Indianapolis 500 winner has unveiled his likeness on the Borg-Warner trophy.  Takuma Sato is the first Japanese driver to win the race. 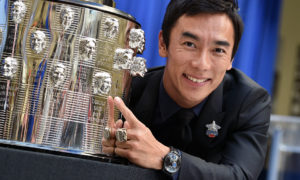 His image is the 104th on the sterling silver 110-pound trophy that is only a quarter-inch shorter than Sato, who stands five-feet-five. After the unveiling, a spokesman for the Borg-Warner company announced the trophy will travel to Japan with Sato in December, its first trip outside the United States.  Sato’s winning car from the 2017 Indianapolis 500 also will be on the trip. He’ll drive some ceremonial laps around the Twin Ring Montegi circuit where IndyCar held races from 1999 through 2011.

IndyCar is losing its series sponsor.  Verizon says it will not renew its sponsorship after next year.  But it will continue to sponsor cars for Team Penske.  This year, Verizon was on cars driven by Josef Newgarden and Will Power.

James Hinchcliffe has signed a new multi-year deal to stay with Schmidt Peterson Motorsports.  He had talked with some other teams but decided to stay where he’s been.