You are here: Home / Business / McCaskill criticizes GOP for not giving specifics about proposed tax changes

U.S. Senator Claire McCaskill, D-Missouri, wants Republicans to be more specific about how they plan to change America’s federal tax policy. During dinner at the White House this week with President Donald Trump, R, and some of her Republican and Democratic colleagues, McCaskill discussed the issue with them. 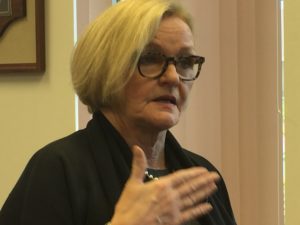 “My takeaway was good first step, would like to work together but we need a plan. It’s hard to negotiate what you think is important against a couple of principles. I need to know what their proposal is before I can hopefully negotiate a compromise,” says McCaskill.

McCaskill compares the lack of information given about tax code changes to boxing shadows – only broad strokes are known.

“I was anxious to get more information on how they are specifically going to simplify the tax code and how are they going to clear out some of the loopholes that allow some corporations to pay zero and others to pay a full load,” says McCaskill.

She wants to know how big the child tax credit will be, how it’s going to be paid for, how many families will be entitled to it and if it’s refundable.

“We don’t even know what the child tax credit proposal is and that’s crucial,” says McCaskill.

Without an increase in the child tax credit, she says any family in Missouri would be paying more in taxes because of the proposed elimination of a personal exemption if they have more than one child.

“That’s not acceptable. You can’t make people pay a penalty because they’ve had more than one child,” says McCaskill.

According to McCaskill, a family of four making $50,000 a year would pay $887 more under the Trump plan without any additional help on the child tax credit.

About 95% of American businesses are so-called pass-throughs. They include sole proprietorships and partnerships. The name comes from the profits and losses of such businesses that pass through directly to their owners, unlike public corporations.

Pass-through profits are taxed at top individual income-tax rates as high as 39.6%, higher than the top corporate income tax rate of 35%. Republicans want a new pass-through rate of 25%. McCaskill thinks there has to be “some guard rails” on that concept.

“I think it’s really important that we take a look at this pass through issue,” says McCaskill. “I have no problem wanting to give a tax cut to a small business but I’m not interested in giving 80% of a tax cut to people who make more than $1 million.”

At the end of August, Trump made a stop in Springfield to kick off his tax reform campaign. Among other things, Trump’s plan would:
●Repeal the estate tax
●Reduce the corporate tax rate to 15%
●Reduce the seven individual income-tax brackets into three
●Double the size of standard deductions for married couples and individuals
●Allow more people to qualify for a child tax credit designed to help low-income families

Trump says other countries are taking America to the cleaners with their business tax rate. He says bringing the rate down to 15% would make the U.S. highly competitive in the international business world.