A town hall featuring Missouri’s 4th District Congresswoman Vicky Hartzler is seeking to draw young people of high school age and below.  Hartzler has made herself scarce for adult town halls previously this year. 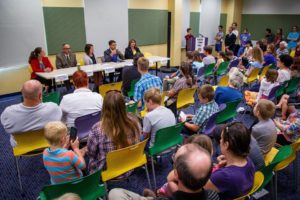 The Wednesday gathering in Mid-Missouri’s Ashland is at least partly the brainchild of 11-year-old Jacob Schelp, who moderated a similar event with Boone County state representatives in June.

Jacob is the youngest member of his local Republican focused Pachyderm Club.  He says he took a liking to politics through an early interest in history at the age of five, but became hooked after attending several political forums in the past year.

When he noticed there weren’t any other kids at the events, Jacob decided he’d look into holding one of his own town halls specifically for youth.  He says Wednesday’s event with Hartzler will have a special atmosphere because only kids will be able to submit questions.

Jacob’s mother Robyn says there has been interest from voters in attending the forum, noting those people have mentioned that Hartzler hasn’t done any other town halls recently.  Earlier this year when Republicans were often greeted by hostile crowds at local forums, Hartlzer commented that the gatherings “just aren’t that productive right now as we’ve seen nationwide”.

Robyn Schelp emphasizes the need for civility at youth forums.  She says she and Jacob had to leave one adult town hall when a debate over gun control became unhinged.

“People got very upset with some of the answers and remarks”, said Robyn Schelp.  “At one point, one of the legislators even said ‘Hey guys, this isn’t appropriate.  We need to be acting like adults.’  And someone started screaming and was taken out of the room.  It was pretty intense.”

The elder Schelp says the event will be non-partisan, even though her son and Hartzler happen to be Republicans.  “There are three kids actually putting this together and they’re not all Republican.  One is definitely not.  So, it is not a Republican thing.  It just so happens our rep (Hartzler) for this area is Republican.”

The two other kids involved in organizing the event are Zackary Sample and Claire Thurnau.  Zackary is an 8th grader who is passionate about the environment, and the role government has in protecting it.  Claire is also an 8th grader who enjoys cheerleading, but also has her sights set on law school after high school and college.

Jacob Schelp is hoping for a good turnout at the Wednesday youth town hall in Ashland, Missouri.  He says local schools, the 4-H Club and Boy’s and Girl’s Scout groups have all been notified of the event.  Jacob also says local media, including a newspaper and TV station, have lent coverage to the upcoming town hall.