Culberson tried to score from second on a single by Justin Turner and was initially called out by umpire Mike Winters for not touching home plate. After video review, it was overturned giving the Dodgers the run in a 5-2 final in Game One of the NLCS.

Joe Maddon lost his mind and voiced his displeasure with the umpires on what he believes is a soft rule.  It was a rule, when instituted a couple of years ago that drew rave remarks from Cardinals manger Mike Matheny, who claims his career was cut short due to 25-30 collisions at home plate during his playing career.

“I’m not on a mission here to try to do anything except do what’s right,” Matheny said back in February of 2014. “First of all, make people aware that the concussion thing is real and not just in football and hockey. It’s real in baseball, and I did a real poor job of communicating that early on. And the other thing is, let’s take a risk-reward analysis of this thing. What is the risk of the good of the game, let alone the individual, and the long-term repercussions? And what’s the reward?”

“It’s sad. It’s sad the direction our game has gone. Textbook play by the kid, and he got penalized for it,” said Lackey.

“I could not disagree more with the interpretation of that,” Maddon said. “I think it’s wrong. I think anybody that’s played major league or even minor league baseball will agree with me 100 percent on that.”

What the Cubs fail to understand is that if the rule is not in place, Culberson likely plows into Contreras or at the very least slides feet first into their star catcher potentially injuring his outstretched leg. 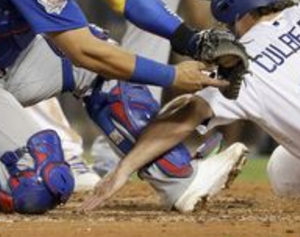