(NASCAR)—Let’s cut to the chase.   Actually, it’s not the Chase this year; NASCAR calls the last ten races of the year the playoffs.  This weekend, the scene shifts to the longest track on the schedule Talladega, Alabama. And Joplin’s Jamie McMurray has to run well again to stay in contention for the next round of playoffs.

It’s a restrictor plate race where McMurray and the other competitors will be running nose-to-tail at about 200 mph, packed together because the restrictor plates sap horsepower from the engine, making drafting essential.  Last May, when McMurray finished second to Ricky Stenhouse, the fastest qualifying speed was Stenhouse’s pole run at 191.547. 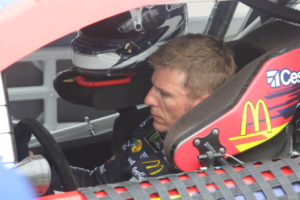 But, we asked McMurray this week, how fast would he and his competitors be lapping if there were NO restrictor plates at Talladega.

When you listen to the interview, you might notice a slight pause when he gave his answer—because, frankly, it kind of scared the interviewer when he thought of it.

McMurray, who has won twice at the big track, goes into this second race of this three-race elimination cycle clinging to eight place by one point.  Only eight drivers will remain in contention after next weekend’s race at the Kansas Speedway.

Ryan Newman, whose crash early in last week’s race at Charlotte, likely ended his hopes of advancing calls Talladega “the biggest crap shoot, so to speak, of what we have to deal with in the playoffs.”

We talked to McMurray about the crap shoot, his prospects, his strategy, and a few other things.

The green flag is scheduled to drop about 1:20 our time.