(NASCAR)—Only twelve of the forty starters of ran all 188 laps at Talladega and some of them were damaged in the series of big crashes near the end.  Two other cars were a lap down.  No other cars were running. 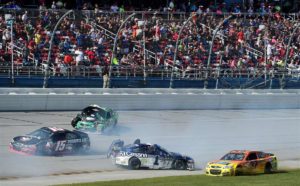 Jamie McMurray’s (#1, right)chances of advancing to the next round appear to have suffered a mortal blow.  A collision with Jeffrey Earnhardt when he tried to pit on the 26th lap left him 37th in the race and dropped him to the bottom of the playoffs points.

Joining McMurray on the outside looking in with one race to go in this playoff round are Kyle Busch, one of 16 drivers on the 172nd lap, Matt Kenseth, who was fourteenth and the last car still under power at the end, and Ricky Stenhouse Jr., who was bidding for his third straight restrictor plate victory. Stenhouse was in the same crash that eliminated Busch and was awarded 26th, one position ahead of Busch.

Keselowski and Denny Hamlin, who finished sixth, were the only two top-eight playoffs drivers to finish in the top twelve. 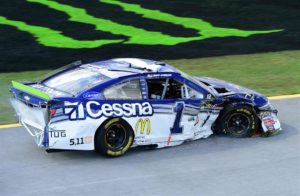 McMurray’s championship hopes have ended in a wrecked car on the apron of the Talladaga Speedway unless he can win next weekend at Kansas, a track that has not been good to him.  His ninth place in May, 2015 is his only top ten in his last ten races there.

Only the top eight drivers in points and/or victories will advance to the third playoff round after the Kansas race.

(INDYCAR)—IndyCar’s Rookie of the Year is Ed Jones, who earned five top ten finishes and a third-place in this year’s Indianapolis 500.  Jones, who was born in Dubai, United Arab Emirates, moved from the Indy Lights, where he won last year’s championship, to Dale Coyne Racing for the full IndyCar schedule this year.

IndyCar has announced its seventeen-race schedule for 2018, leaving Watkins Glen and shifting to Portland, Oregon for its next-to-last race of the year.  CEO Mark Miles says negotiations for a race in Mexico City as an eighteenth event have been slowed by the recent earthquake there.

Josef Newgarden begins defense of his 2017 championship March 11 with a street race in St. Petersburg, Florida.

Teams have started testing the new body setup.  Want to take a test ride along with Spencer Pigot at Road America?

(FORMULA 1)—F1 comes to the United States next weekend.  The Circuit of the Americas at Austin, Texas hosts the event. 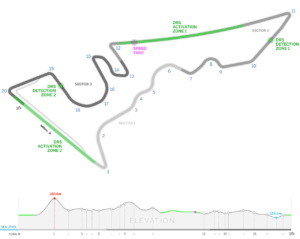 Lewis Hamilton comes into the race with a strong lead  over Sebastian Vettel after two straight wins and two disastrous races for Vettel. Only three races will remain on the schedule after the USGP.