You are here: Home / Business / Republican State Rep. wants to debate use of state taxpayer money on NFL teams

State Representative Nate Walker is calling for a review of all public funds used in the construction and maintenance of NFL facilities. 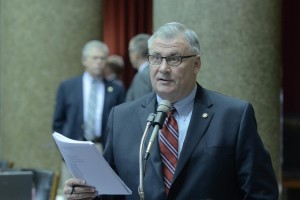 The Kirksville Republican thinks the league is disrespecting the U.S. flag, the country and the state by allowing recent protests during the national anthem.   Walker says the state tax dollar investment in NFL stadiums and facilities is substantial.

“Since 1991, the Missouri tax payers have spent more than $150 million on facilities for Missouri NFL teams,” said Walker.  “That includes the St. Louis Rams, who are no longer in St. Louis, and also training facilities for the Kansas City Chiefs.”

WDAF-TV reports the “Sports Complex Authority” claims $3 million from the state are for both the Kansas City Chiefs (NFL) and the (Major League Baseball) Royals.  The Complex Authority declined to comment on Walker’s statements Monday afternoon.

The state of Missouri still owes in excess of $43 million for the St. Louis stadium vacated by the Rams, who left for Los Angeles last year.

Walker thinks public funding is at risk of being misused when player demonstrations are permitted at games.

“The NFL has an obligation to sort through and make sure that they conduct themselves, and their players conduct themselves in a way that’s honoring our flag, honoring our country.  Certainly, people have First Amendment rights, but those rights have to be tempered a little differently when you go into the workplace.”

Walker says when Missouri first conceived the idea of publicly funding NFL stadiums, nobody thought the league would put political protest ahead of good business and civic responsibility.  He thinks the NFL must be held accountable for its use of taxpayer dollars when it impacts local communities.

“If the NFL is a big business, we want to make sure that if we invest in something in the state of Missouri with tax payer’s money, we have to look toward the impact on our own local and state economy.”  Walker says he wants to debate if taxpayer dollars should continue to support the NFL.

Walker told Missourinet affiliate KWIX Monday that he plans to ask the legislature to form a joint committee to review all NFL stadium funding and determine what options are available to protect Missouri taxpayers.

He said measures such as suing the NFL are on the table, as well as modifying existing contracts and banning future taxpayer funding of stadiums.

Walker also says he’ll call on national organizations such as the National Conference of State Legislatures and the American Legislative Exchange Council to share information and develop strategies for legislators in every state with publicly financed NFL stadiums.

Player protests have sparked political controversy across the country.  Vice President Mike Pence left a football game between the Indianapolis Colts and the San Francisco 49ers on Sunday after some players knelt during the National Anthem, saying he did not want to “dignify” the demonstration.  Some Democrats criticized the move as a political “stunt” and an expensive use of federal tax dollars because Pence traveled several thousand miles from, and back to the west coast after the brief appearance in Indianapolis.

Bob Ehle of Missourinet affiliate KWIX contributed to this story