(NASCAR)—Joplin’s Jamie McMurray, bidding to move into the third round of NASCAR’s playoffs, has raced past four other drivers and into the top eight in points with a solid fifth-place run at Charlotte.  McMurray started the day seeded twelfth, last in the second-round standings.  Eight drivers will advance to the third round after next weekend’s race at Talladega and the race at Kansas a week later.

McMurray started eighteenth but ran in the top three for most of the first stage, led once for four laps, came home fifth at the end at a track where he often runs well.

Martin Truex Jr., overcame an uncharacteristically bad qualifying run, starting seventeenth, but defended his lead on the last restart and won by almost a full second.  Chase Elliott was the runner-up for the second race in a row. 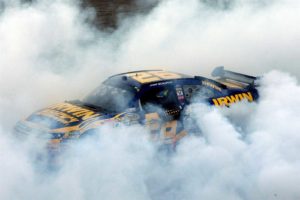 McMurray (show after his Talladega victory in 2009) is one point ahead of Matt Kenseth and two up on Brad Keselowski, both former Cup champions.  He’s seven behind Jimmy Johnson, the 2016 champion.

Talladega is next up, a restrictor plate race on a track where McMurray has done well but a track that often scrambles standings because of major wrecks resulting from pack racing at 200 mph. He also won at Talladega in 2013, was second in last May’s race and has another second-place finish there from 2000.

NASCAR’s silly season is well underway with drivers leaving one team and moving to another or speculation about what free agent drivers at the end of the year will find rides and which will be retired.  One name not being heard is Carl Edwards, the Columbia driver who announced last January he wasn’t racing this year. 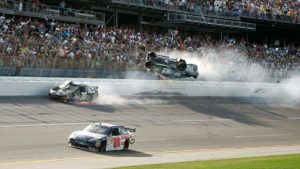 AUTOWEEK reports there has been no sign that Edwards is interested in coming back.  Jack Roush, who fielded the cars and trucks Edwards drove for fourteen years says he’s gotten only two texts from Edwards since he made his announcement and, “He didn’t express to me any indication that he wants to come back.”  Some other team leaders say they haven’t heard anything from him.

It is getting along toward corn and bean harvesting season in Missouri.  And Carl does like to drive those machines, too.

(FORMULA 1)—It’s tempting to say that Lewis Hamilton put a lock on his fourth F1 championship with his win in the Japanese Grand Prix on the Suzuka circuit, increasing his lead over Sebastian Vettel to fifty-nine points.  It’s Hamilton’s fourth win the last five races and gives him a fifty-nine point lead over Vettel, who dropped out after four laps.

Hamilton’s fourth championship will make him the United Kingdom’s most successful Formula 1 driver, giving him one more than Jackie Stewart.

The next Formula 1 race will be within driving distance for many Missourians.  It’s on the Circuit of the Americas near Austin, Texas next Sunday.

(IndyCar)—Helio Castroneves is done as a full-time driver in IndyCar.  Roger Penske will have a car for him in May as Castroneves tries again to win his fourth Indianapolis 500. Otherwise, he’ll be racing on Penske’s new sports car team in the IMSA series.  Castroneves moves to the team’s fourth car for the 500, eliminating Juan Pablo Montoya’s ride in the race with Penske. He’s free to sign with another team although he, too, will be in sports cars this year for Penske.

One-time Indianapolis 500 winner Tony Kanaan will drive for five-time winner A. J. Foyt full time next year.  Kanaan won the 500 in 2013.  Foyt has four wins as a driver and owned the car that Kenny Brack won the race with in 1999. Kanaan lost his ride with Chip Ganassi Racing at the end of this season.

Stefan Wilson is getting his Indianapolis 500 ride back with Andretti Autosports.  He gave up his seat this year so former Grand Prix champion Fernando Alonso could run the race.  Wilson would like to use the 500 to attract enough sponsor support to run more races next year.  His brother, Justin, was killed in a racing incident at Pocono in 2015.