(NASCAR)—Joplin driver Jamie McMurray has reached the second round of the NASCAR playoffs for the first time in his sixteen-year Cup career.  He again is the bubble driver, the one with the fewest points—as he was at the start of the first round.

McMurray started the race on the Dover Monster Mile buried deep in the field, twenty-sixth, but was ninth at the end

Drivers Ryan Newman, Austin Dillon, Kasey Kahne, and Kurt Busch were eliminated after the first three-race round.  Four more drivers will be eliminated after races at Charlotte (next week), Talladega, and Kansas. 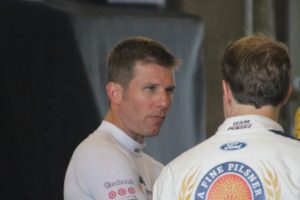 While McMurray (talking to fourth-place championship contender Brad Keselowski) has the fewest points starting round two, he is only seven points out of eighth place, the next cutoff point.  He has to get more points Matt Kenseth, Chase Elliott, and Ryan Blaney, and Ricky Stenhouse, Jr., to make round three.

“I have to win,” he said after the Dover race to guarantee a slot in round three.  But he’s encouraged because the next two tracks, Charlotte and Talladega, are good tracks for him.  He won his first Cup race at Charlotte in 2002, setting a NASCAR record for winning in his second race.  He also won the Charlotte fall race in 2020.  In thirty-one races at Charlotte, he has eleven top tens and seven top fives.  He was twelfth in the 600-mile race last May.

McMurray is recognized as one of the stronger drivers on the restrictor plate tracks.  He won the fall race at Talladega in 2009 and picked up his most recent Cup trophy at Talladega in 2013.  He also has won twice at the other restrictor plate track in the series, Daytona.  He has nine top tens in thirty races at Talladega.  Eight of those top tens have been top fives.  He was second to Stenhouse by a car-length in the spring race at Talladega, storming from sixth to second on the final lap to finish only .095 second behind Stenhouse.

But he has struggled at Kansas, the final race in the round.  He has only four top tens in thirty-one races there, has never won or finished in the top five at Kansas. He was eighth in the July race.

Part-time Missourian Clint Bowyer climbed from a nineteenth starting position to sixth at the end, his second straight top-ten.

(FORMULA 1)—Max Verstappen got past pole-sitter Lewis Hamilton on lap four of the Grand Prix of Malaysia Kuala Lumpur, and led the rest of the way to pick up his second Formula 1 victory.  Hamilton chased him home, increasing his points lead over Sebastian Vettel, who surged from a twentieth starting position to come home fourth.  Hamilton leads Vettel by thirty-four points as F1 heads to the Japanese Grand Prix for the fifteenth of twenty races in the series this year.

The race on the Sepang Circuit is likely to be the last Formula 1 race in Malaysia in the foreseeable future.  The Malaysian government has decided to quit picking up the costs of the race.

(INDYCAR)—IndyCar has wrapped up its tests of the aero kits for 2018 with some extra drivers joining testers Juan Pablo Montoya and Oriol Servia for runs at Sebring. They were joined by the new series champion Josef Newgarden, Scott Dixon, James Hinchcliffe, and Spencer Pigot (right). 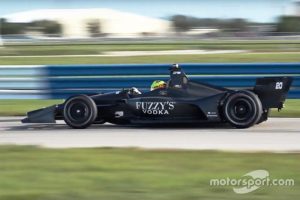 Further testing will be done by Individual teams.  Chevrolet and Honda teams each will be able to run five two-car tests.  Private team testing will start in January.  The new aero kits will be fitted to the same Dallara IR-12 chassis now being used.

Competition Vice-President Bill Pappas says the completion of testing for the 2018 aero kit will enable IndyCar to start planning the next generation chassis scheduled to debut in 2021.