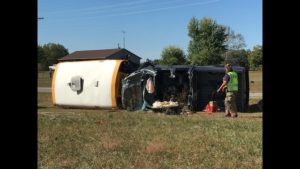 Investigators say that the driver of the truck was in the wrong lane and swerved into the bus, killing simpson and injuring members of the Harrisburg track team (photo/KMIZ-TV, Columbia)

Brian Simpson, a teacher and coach for Harrisburg High School, died from injuries sustained in a vehicle wreck on Thursday afternoon near Columbia.  Police said a truck crossed the center line and struck the Harrisburg school bus head on. The bus had a half-dozen people on board and was heading to a cross country meet in Moberly.  Simpson was driving the bus at the time of the wreck.

There were five other people on the bus, girls from the Harrisburg cross country team.  The five girls have minor to moderate injuries. One girl that was transported to the hospital.

The name, age and condition of the truck driver were not immediately released.

School in Harrisburg has been called off Friday and the football game for Friday night with Fayette has been postponed.

It is with a very heavy heart that I am informing you that a bus carrying our cross country team was involved in a serious accident this afternoon that resulted in the death of Brian Simpson, a beloved history teacher and coach. The accident also resulted in injuries to several of the student athletes.  We are all shocked and saddened by these events.

We need our staff, parents and community to know that our first priority is to tend to the well-being of Mr. Simpson’s family and our students.

School will not be in session tomorrow as we will work together to support the Simpson family, as well as the needs of our students and staff. We will have additional counselors at the schools tomorrow who will be available to support any student or staff member as needed.  We will also continue to provide counseling next week.

At this time we do not have all the details of the situation, so we cannot address specifics.

We have made contact with the families of all those on the bus.   We have also had the opportunity to meet with district staff to let them know of the situation.

Please join us in keeping all of those involved in the accident in your thoughts and prayers.