The city of St. Louis has been sued by the American Civil Liberties Union (ACLU) for alleged unlawful and unconstitutional police conduct against protesters reacting to a controversial court decision. Demonstrators have hit the streets of St. Louis and the surrounding area since a judge’s ruling one week ago involving 36-year-old Jason Stockley. 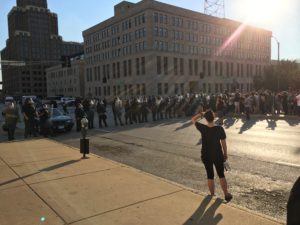 A line of St. Louis Police officers near Tucker downtown watch nearby protesters on September 15, 2017 (photo from Missourinet’s Jason Taylor)

He was found not guilty of first-degree murder in the shooting death of an African-American suspect. During a 2011 police chase, Anthony Lamar Smith, 24, was killed by Stockley.

The ACLU lawsuit claims police misconduct using chemical weapons, interfering with video of police activity and violating due process during Sunday night’s “kettling” incident in downtown St. Louis. Kettling is when officers surround individuals and box them into a dead end.

“While long shifts and being the subject of the protest is understandably challenging for police, that is no excuse for violating the Constitution,” said Tony Rothert, legal director of the ACLU of Missouri.

Participants have been agitated by some officers dressed up in SWAT gear that they consider “riot” equipment. Protesters have also reported some officers chanting back at them, using tear gas and pepper spray.

“St. Louis should be a place where all people feel safe against retaliation from law enforcement, and all should receive due process. We should strive to be a place where every citizen feels supported by the communities we call home. This is the vision that drives us into the streets and inspires us to hold our leaders accountable when they betray our values,” said plaintiff Alison Dreith, who says she was pepper sprayed by police without warning on September 15. 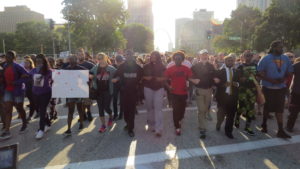 The St. Louis demonstrations since last Friday’s Stockley ruling have been largely peaceful during daylight hours but some nights have turned violent. More than 130 people have been arrested for their alleged actions during protests. Over a dozen officers have been hurt, including one with a shoulder injury and another suffering from a jaw injury.

There have been reports of people throwing water bottles, rocks and bricks at officers. Protesters threw rocks and paint at the home of Mayor Lyda Krewson, a Democrat who supports peaceful protesting. At least two of her home’s windows were broken.

The court decision has reopened the racial wounds that have not healed since Michael Brown, Jr. was killed in Ferguson in 2014 by a white police officer. A grand jury chose not to indict Darren Wilson for the shooting death of Brown, who was unarmed. 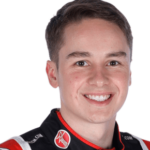 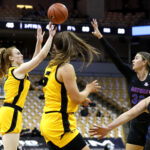