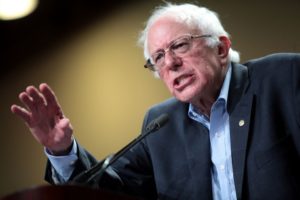 The Vermont Senator will deliver the 58th Annual Green Foundation Lecture Thursday morning at 11 at Westminster College. Westminster says Sanders will lecture “on his vision for a progressive American foreign policy.”

Westminster spokesman Rob Crouse tells Missourinet Champ Auditorium seats about 1,300 people, and that all tickets have been issued.

Crouse says the live stream will also be shown Thursday in overflow rooms at the campus church (Church of St. Mary the Virgin, Aldermanbury) and in the Coulter Lecture Hall. He says there will also be speaker systems set up outside Champ Auditorium for people to listen.

Crouse says Senator Sanders is writing the speech, specifically for this Fulton event.

The 76-year-old Sanders, who narrowly lost the 2016 Democratic Presidential nomination to Hillary Clinton, is the longest-serving independent member of Congress in American history.

He served 16 years in the U.S. House and is finishing his second U.S. Senate term.

Sanders won 1,893 delegates in 2016, receiving more than 13-million votes. National media reports indicated that is the fifth-most votes of any candidate in a presidential nomination race.

Winston Churchill delivered his famous “Iron Curtain” speech on the Westminster campus in 1946.

Retired General David Petraeus traveled to Fulton to speak at Westminster in April. General Petraeus warned that the United States must keep its “eyes wide open” when cooperating with Russia.