You are here: Home / Crime / Courts / Missouri State Rep to resign to take parole board post

Rep. Paul Fitzwater, R-Potosi, tells Missourinet he will resign today. Republican Governor Eric Greitens has appointed Fitzwater to serve on the Missouri Board of Probation and Parole. 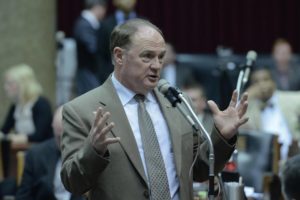 Fitzwater was elected in 2010 to serve in the Missouri House of Representatives. Due to term limits, 2017 would have been his fourth and final term in that chamber.

Fitzwater has chaired the House’s Corrections and Public Institutions Committee. He has also served on a subcommittee studying the workplace environment and conduct in Missouri’s prisons. The latter panel’s investigation involves dozens of allegations of harassment, intimidation and abuse by corrections employees toward other staff. The culture has led to the state paying out more than $10 million during a five year period to settle such lawsuits.

Greitens’s appointment of Fitzwater comes after former board member Don Ruzicka played word games with an unnamed state worker during the parole hearings of prisoners. A report details them allegedly engaging in a game where they tried to get inmates to say certain words or song titles, and would keep score of results.

Ruzicka, a former Republican State Representative from Mt. Vernon, was appointed to the board in 2012 by former Democratic Governor Jay Nixon. He made $85,000 in his position. Board members serve six-year terms.