(NASCAR)—Joplin’s Jamie McMurray has squeezed into NASCAR’s championship elimination rounds for the third straight year.  His place in the sixteen-driver field was sealed Saturday night with teammate Kyle Larson’s victory at Richmond.

The win, Larson’s fourth of the year, meant McMurray, Matt Kenseth, and Chase Elliott would get into the playoffs on points.  Kenseth’s car was damaged when the field made pit stops during a caution period and had to dodge an ambulance that had stopped in the pit road approach. He finished next-to-last, thirty-eighth, dropping him into the position of being eliminated if a driver won the race who had not previously won this year. His misfortune, however, guaranteed that McMurray would be in the playoffs regardless of the race’s outcome.

Larson won the race by coming out of the pits with the lead when caution flew with three laps left in the scheduled 400-lap race.  He surged ahead of Martin Truex Jr., on the restart and nobody could catch him.  Truex, who had a comfortable lead on the way to what would have been his fifth win of the year, crashed after tangling with Denny Hamlin on the last lap of what became a 405 lap race.

Clint Bowyer, who had to win to make the playoffs, contended early but fell to twenty-fourth at the end after enduring various problems.

NASCAR re-sets the points standings at the start of the ten-race playoff, giving all sixteen drivers two-thousand points plus bonus points earned for winning races and winning stages during races.  McMurray will start with 2003 points, the fewest of the sixteen drivers.  He will have to win for the first time since winning at Talladega in 2013.  The field will be cut to twelve after three races. McMurray must win or accumulate more points than four other drivers to advance.  Although he starts with the fewest points, only three points separate him from Chase Elliott, who is seeded tenth.

Truex won the regular season championship and begins the playoffs with 2053 points, twenty more than Larson and two-dozen more than Kyle Busch.

The first playoff race will be next Sunday at the Chicagoland Speedway, where he has only three top tens in fourteen races.

Unlike other major sports, all competitors still run for race wins.  Although four drivers are eliminated after three three-race rounds leaving two to race head-to-head for the title, as many as forty cars will start each race.

(INDYCAR)—A half-dozen IndyCar drivers have been driven from their homes in Florida by Hurricane Irma.  IndyCar reports Tony Kanaan, Ryan Hunter-Reay, Helio Castroneves, Juan Pablo Montoya. Carlos Munoz, and Ed Jones had gone north with their families.  At last report, Sebastien Bourdais was going to ride out the storm at his home in St. Petersburg.

The last IndyCar race of the season is next Sunday on the Sonoma road course in California.  Josef Newgarden and four-time champion Scott Dixon go into the race separated by only three points.  Castroneves, twenty-two points back, has a slim hope for his first IndyCar championship.  Reports indicate this will be his last year as a fulltime driver for Penske—that he’s moving with Montoya into Penske’s new sports car venture. 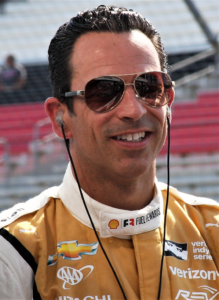 But he told the Indianapolis Star last week, “Nothing is official.  Nothing is written or anything like that…They understand my feelings, but I still have the feeling that I can change things around depending on the result.”

The Sonoma race could produce significant changes in the standings.  The points are doubled for the race.

(FORMULA 1)—Formula 1 heads to the streets of Singapore next Sunday with a new points leader, Lewis Hamilton.  It’s the only night race on the Formula 1 calendar. Hamilton, a three-time champion, took the lead from Sebastian Vettel in the last race and heads to Singapore three points up.

Only seven races remain on the schedule, including the United States Grand Prix at the Circuit of the Americas near Austin, Texas October 22.