(NASCAR)—Denny Hamlin made up twenty seconds on Martin Truex Jr., in the closing laps of the Southern 500 at Darlington, gaining his second win of the season and his second Southern 500 trophy.

The repeat victory by Hamlin means Chase Elliott, Matt Kenseth, and Joplin’s Jamie McMurray remain in the running for the ten-race playoff that will decide the overall NASCAR champion for 2017.  Disaster struck Clint Bowyer, who was the first driver outside the top-sixteen with a chance to muscle his way into the championship round, when his engine failed only eighteen laps into the race, leaving him last in the race and ninety-one points behind McMurrary.  The only way Bowyer can get into the playoffs now is to win next weekend at Richmond.

If Bowyer or someone else who is winless so far this season wins at Richmond (other than Elliott, Kenseth, and McMurray), one of the three will be eliminated from the playoffs.  The three are separated by only three points, putting pressure on each of them to finish ahead of the other to remain in the running for the title in case a previous non-winner takes the checkered flag first.  Should one of them win, of course, the other two would still be in contention.

Truex lost the lead with three laps left when his right front tire went flat as Hamlin, on newer tires, inched closer. He finished eighth but has enough points to be considered the winner of the regular-season championship. 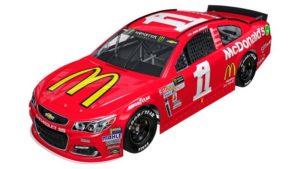 The Darlington race is NASCAR’s annual “throwback” race in which many cars have special paint jobs honoring past NACAR greats. Jamie McMurray’s design, which featured the regular colors of one of his major sponsors, honored David Pearson, whose 105 victories rank second only to Richard Petty’s 200.  Pearson won three championships (1966, 1968, 1969) 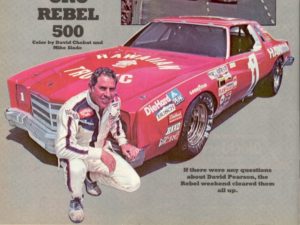 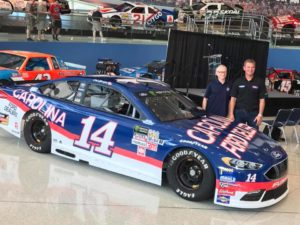 Clint Bowyer’s car was a salute to Mark Martin, (Martin and Bowyer are shown with the car) whose early career involved a lot of racing in Missouri and learning a lot from the legendary Larry Phillips.  The Bowyer car is reminiscent of the cars Martin drove for Bill Davis, a friend from Bentonville, Arkansas who decided he needed to go racing. 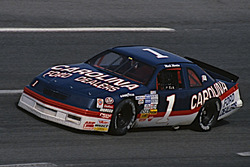 Martin picked up his first three top-level NASCAR victories driving for Davis.  Martin drove Cup cars for thirty-one years, won forty races, but never a championship. He finished second in the standings five times, the most for any driver in NASCAR history.  He was 54 when he climbed out of a car after a race for the last time in 2013.

(INDYCAR)—The IndyCar championship standings have gotten a major shakeup that puts everything on the line at the last race of the season in two weeks.

Last year’s Indianapolis 500 winner Alexander Rossi had the strongest car all day, starting from the pole and leading more than half the race. He was pressured at the end by Scott Dixon, a four-time winner at The Glen, but still won by almost a second. It’s Rossi’s second IndyCar victory, first on a road course.

Points leader Josef Newgarden crashed coming out of the pits at Watkins Glen, leaving his car with front-end damage, but also incurring significant damage to the rear of his car when Sebastien Bourdais couldn’t avoid contact. Newgarden made several pit stops to repair damage and came home two laps down in eighteenth.

The shunt cost Newgarden most of his points lead.  Dixon now trails him by only three points. Helio Castroneves, who finished fourth, cut his deficit in half and is now only 22 points behind going to Sonoma, where a victory is worth 100 points.   The September 17 race wraps up the season for IndyCar.

(FORMULA 1)—Lewis Hamilton has seized the lead in the Formula 1 standings for the first time this year with his win in the wet at Monza, considered the home track for his main opponent, Ferrari driver Sebastian Vettel. Hamilton led Mercedes teammate Valterri Bottas across the line by a second. Vettel was third and now trails Hamilton in the points by three.

Hamilton started from the pole, his record 69th, breaking a tie with Michael Schumacher. The win his fourth Italian GP victory, which ties him with Nelson Piquet.  It’s his Hamilton’s sixth win of the year.

Hamilton has won from the pole 37 times in his career.  Schumacher won from the pole forty times. The BBC’s chief Formula 1 writer says that record puts him in the top three of modern Formula 1 drivers.  Hamilton has won sixty-nine poles in 200 races.  Schumacher needed 250 to achieve his sixty-eight.  But Ayrton Senna tops both.  He started P-1 sixty-five times in only 162 races.

The Grand Prix of Singapore is next, in two weeks.  Vettel has won four of the last six races there.  Hamilton won two years ago. Last year’s F1 champion, Nico Rosberg, won at Singapore last year.

Previous Post: « Lock breaks #Mizzou pass records in big win over MSU (VIDEO)
Next Post: All available Missouri state troopers will be on the roads and waterways on Labor Day (AUDIO) »