Vermont Senator and former presidential candidate Bernie Sanders (I) will deliver a foreign policy speech this month at Westminster College in mid-Missouri’s Fulton.

The school announced Friday on Facebook Live that Sanders will deliver the 58th Green Foundation Lecture on September 21 at 11 a.m.

Westminster says Sanders will lecture “on his vision for a progressive American foreign policy” at the Champ Auditorium, in conjunction with Westminster’s annual Hancock Symposium.

Sanders, who narrowly lost the 2016 Democratic presidential nomination to Hillary Clinton, is the longest-serving independent member of Congress in American history.

He served 16 years in the U.S. House and is finishing his second U.S. Senate term.

“The Green Foundation Lecture represents all that is good about Westminster College and our nation’s role in engaging the world as Winston Churchill did here (in Fulton) in 1946,” Dr. Kurt Jefferson says.

Dr. Jefferson is the Churchill Institute for Global Engagement Director, the Westminster office that’s in charge of the lecture series.

“It is one of the marker events in American higher learning today. Senator Sanders will now leave his stamp on post-Cold War history with his thoughts on American foreign policy today.” 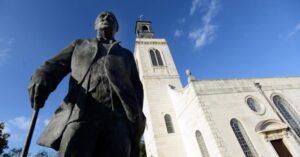 Former President Ronald Reagan spoke at Westminster in 1990, a year after the Berlin Wall fell. Reagan dedicated the Breakthrough sculpture.

Retired General David Petraeus traveled to Fulton to speak at Westminster in April. Petraeus warned that the United States must keep its “eyes wide open” when cooperating with Russia. Petraeus told Missourinet in April that Russia is not a U.S. ally.