A social media post by Missouri State Rep. Warren Love, R-Osceola, calling for vandals to be “hung from a tall tree with a long rope” is creating public outcry and demands for his resignation. His comment is in response to the vandalism of a Confederate monument at the Springfield National Cemetery. 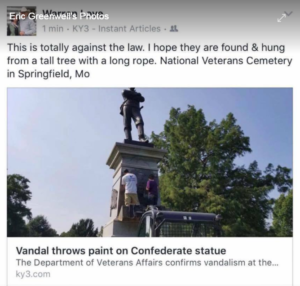 Love tells Missourinet he regrets conveying the message the way he did.

“You don’t really think nothing about it but then words do have meanings,” says Love. “I am sorry. I’m trying to clear it up.”

Love refers to the comment as a “cowboy-ism” with no racial undertones.

As far as really asking or thinking that somebody needs to be hung for that penalty, that’s just a far cry. That’s just an exaggeration. That’s just a statement and I shouldn’t have made it,” says Love. “In the political world we’re in, anyone sees they think they can make something to attack you and basically saying some bad things towards me as of trying to make out like I was calling for a lynching. I never meant no such thing. It’s just a statement that’s been around in the cowboy world for years. When you’re stealing horses or cattle, why you know, we always said we’d hang someone from a tall tree with a long rope. It’s just an expression.”

Love considers himself to have one of the best relationships with his African-American colleagues in the Missouri House. He says has maintained the only bipartisan legislative softball team with several African-American members on it.

“For somebody to start trying to make out that I’m some kind of a racist is just as far off base as you can get,” says Love.

He thinks vandalism to such memorials should be a felony, not a misdemeanor.

“I thought that it was basically wrong for anyone, whether it be their age, their race or their gender, to desecrate or vandalize an object of remembrance that had been placed by a loved one in a cemetery or in a way to honor someone,” says Love.

Vandalizing property is wrong, but hoping for people to be hung/lynched over it?? Way over the line!! What is wrong with us #moleg? pic.twitter.com/b0ulohvatQ

This is deeply disturbing. This same Rep called a black legislator a NEGRO earlier this session! He needs to go! https://t.co/JqJedCuY0s

This is a call for lynching by a sitting State Representative. Calls for poltical violence are unacceptable. He needs to resign. #moleg pic.twitter.com/FZCNmsLLY7

Love says his words do not warrant stepping down. Instead, he says, there should be a discussion about increasing penalties for vandalizing such property.

Love says there is a difference between his comment and State Sen. Maria Chappelle-Nadal’s recent social media post saying she hopes President Trump is assassinated. Love says he didn’t use specific names.

Some state and federal lawmakers on both sides of the aisle are calling for Chappelle-Nadal’s resignation. Lt. Governor Mike Parson, R, wants the Senate to vote to expel her during the legislature’s Sep. 13 veto session.

Whether Love’s comment will end up saving Chappelle-Nadal’s seat will be known soon enough.