(IndyCar)—The return of IndyCar racing to the St. Louis area has produced track records, fierce competition (a little too fierce for the defending series champion), and a win for Josef Newgarden (right) that solidifies his points lead with only two races left in IndyCar’s season.

Pole winner Will Power and teammate Newgarden both broke the track qualifying record set twenty years ago, a record that likely has survived because IndyCar has not raced at the Gateway Motorsports Park since 2003.  But the record did Power little good because he crashed at the start of the race in an incident that also took out Ed Carpenter and this year’s Indianapolis 500 winner, Takuma Sato.

Power led at the start but Newgarden took an outside line into the first turn to seize the lead.  The “dirty air” off the back of Newgarden’s car upset the balance of Power’s car, causing the spin.  Carpenter, also wiggled, hit Sato, then went into the wall and over Power’s wrecked car as Sato spun into the wall a short distance away.

Newgarden dominated the race until another teammate, Helio Castroneves, beat him out of the pits and led the next 52 laps.  He stalled his engine during his next pit stop and came out fourth and was never able to recover.

Newgarden trailed the other remaining Penske team driver, Simon Pagenaud (right) until the 218th of the race’s 248 laps when he saw an opening underneath Pagenaud in the first turn.  The two cars bumped just enough to move Pagenaud out of the groove, allowing Newgarden and Scott Dixon to slip past him. 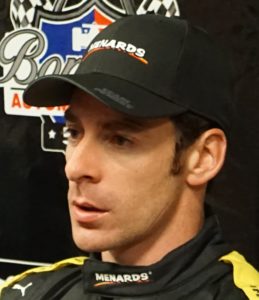 An unhappy Pagenaud said after the race he had lost respect for Newgarden. Pagenaud has finished in the top five in thirteen of the fifteen IndyCar races this season.  He picked up his only win this year at Phoenix.

Newgarden’s victory makes him the first four-time winner on the circuit this year and increases his points lead over Dixon to thirty-one points.  Castroveves drops to forty-two points behind with road-course races at Watkins Glen and Sonoma coming up to finish the season.

IndyCar has not raced in the St. Louis area since 2003.  Track owner Curtis Francois (with Roger Penske) bought track as it was about to close in 2011 and has plowed $15 million into facilities, including a complete repaving of the track for the IndyCar event. 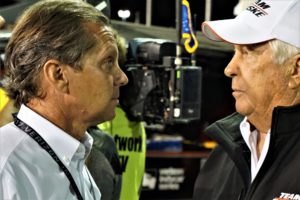 He and other track officials were looking for a crowd of forty-to-fifty-thousand people Saturday night—a night that had competition from the St. Louis Cardinals, who were playing at home a few miles away—and the Mayweather-McGregor fight that started on national television about the same time the race did.  Official attendance figures were not available at the end of the race but the main grandstand appeared full.

The last time we saw Sebastien Bourdais was something of a surprise—when he showed up on crutches in the Indianapolis Motor Speedway Media Center a week after a horrendous crash in qualifying for the Indianapolis 500 (http://www.foxsports.com/motor/story/injury-update-sebastien-bourdais-discharged-from-hospital-after-indy-500-qualifying-crash-052517). 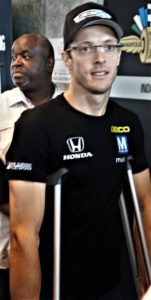 The crash left him with a fractured pelvis and right hip that required surgical repairs.  At first, it was thought he was finished for the year although his orthopedic surgeon said within days that he was “progressing amazingly fast.”

The race at Gateway became his return race.

Bourdais started nineteenth in the twenty-one car field, but posted a top-ten finish despite making two more pit stops than most of the other drivers in the top ten.  “Tough night. Never found good balance,” he tweeted afterward. “Just happy the 18 (his car number) came back with 4 wheels in 10th. 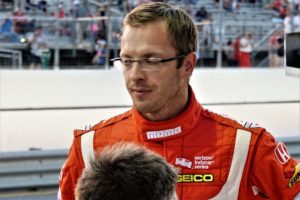 Bourdais won the first IndyCar race of the year, at St. Petersburg, and was the runner-up at Long Beach the next weekend.

One of the biggest criticisms of Gateway in the old days was that getting out of the track after a major race was a major headache.  Although traffic was still backed up more than an hour after the race, it was flowing smoothly, much of it directed to the new I-70 link made possible by the construction of the Stan Musial Veterans Memorial Bridge, which opened in 2014 and now carries traffic to and from St. Louis to the track in Madison, Illinois in minutes.

(NASCAR)—The Cup series took the weekend off before moving to Darlington for a night race next Sunday, Labor Day Weekend.  That race and the race the next weekend at Richmond will decide the sixteen drivers who will compete in a playoff for the national championship.   Joplin driver Jamie McMurray goes into that race as the sixteenth driver in the championship standings.

(Formula 1)—F1 returns after its month-long summer break and Lewis Hamilton charges from the pole to a win that cuts his points deficit to Sebastian Vettel in half.   After tying the retired Michael Shumacher with his sixty-eighth pole, Hamilton outran Vettel for his fifty-eighth Grand Prix Victory, second only to Schumacher’s ninety-one.

The victory in the Belgian Grand Prix is Hamilton’s fifth of the year as he tries to join Vettel as a four-time F1 champion.  Vettel now leads Hamilton by just seven points heading into the Italian Grand Prix next weekend at Monza.

Previous Post: « Castroneves comes full circle at Gateway oval
Next Post: No pitching, no offense in Royals blow out loss »