(Gateway Motorsports Park)—Helio Castroneves, long one of IndyCar’s most charismatic personalities and successful drivers, has come back to a place where his career took off, looking for a win that could give him his first championship in what might be his last full-time year in the series. 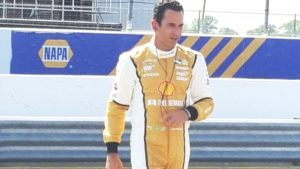 Castroneves will start third at this egg-shaped oval just outside St. Louis, the defending champion—although that win came in 2003, the last time IndyCar raced at the track. He’s one of only three drivers still in the series who raced there. The other two are Tony Kanaan and Scott Dixon.

“It’s been a long time since I’ve been to a track as smooth as a baby’s butt,” he told reporters .

Castroneves was a young driver whose short career was on the verge of ending when St. Louis trucking executive Carl Hogan asked him to drive his car in the series in 1999.  Castroneves’ second-place run at Gateway, his best finish of the year—led to his signing with Roger Penske’s team in 2000, the year Hogan disbanded his team and a year before Hogan died.  A year later he won his first Indianapolis 500, as a rookie, and repeated the run in 2001.  He became a three-time winner in 2009.  His missed his fourth win earlier this year by two-tenths of a second when Takuma Sato beat him to the checkered flag.  Castroneves has two other runner-up finishes in the 500. He says the Gateway track is a “very special place to him.”

The smooth surface is the most recent of $15-million dollars in improvements made by current owner Curtis Francois, who has brought the track back from being on the verge of closing six years ago.

Castroneves enters tonight 42 years old and reportedly will move to Penske’s sports car racing reportedly to team with Juan Pablo Montoya, although Penske would provide a car for him at Indianapolis. 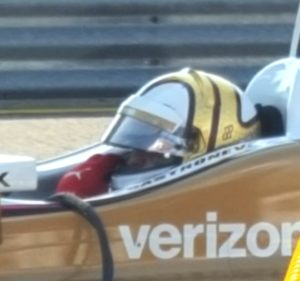 He enters tonight’s race third in points, just 22 behind teammate Josef Newgarden and four behind Dixon. He starts four positions ahead of Dixon, and one slot behind Newgarden. Another Penske teammate, Will Power, has the pole with a record-breaking speed.  Power’s pole is the fiftieth in his career, which ties him with Castroneves for third on the all-time list.

Power and Newgarden broke the old qualifying record set twenty years ago by Raul Boesel, at 187.963 mph on the 1.25-mile track. Newgarden broke the record first with a two-lap run averaging 188.316.  Power, the last driver to qualify, was more than a mile an hour faster at 189.642.