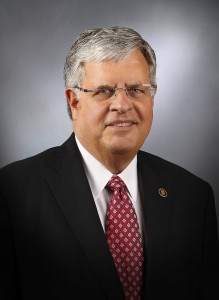 Pro Tem Richard tells Missourinet that Munzlinger should be the Ag senator of the year.

“He has such trust and respect that people go to him wanting to bounce off legislation, how it would affect ag how it would not,” Richard says. “Because when he generally sponsors something or co-sponsors, it generally passes without a whole lot of issues, especially in the ag community.”

Richard praises rural Missouri voters for electing what he describes as pro-agriculture lawmakers. He addressed a few hundred people at an agricultural rally at the State Fair in Sedalia last week.

“And the reason that we are able to pass quality legislation, protect ag and explain it to the city folk where their food comes from, beyond the shelves in the grocery store, is you all and what you do everyday,” Richard tells the audience.

Richard says Munzlinger may be the best Agriculture Committee chair in Missouri history, in either chamber. Richard says people go to Munzlinger to get feedback on how legislation will impact Missouri’s farmers and ranchers.

The Pro Tem also says Missouri farm groups need to start advocating for someone to replace Munzlinger, who has one year left in the Senate before he’ll be forced out by term limits.

Richard and Munzlinger have one year left to serve in the Senate. They are finishing their 15th year in the Legislature.

The next Senate President Pro Tem will assign committee chairmanships.

Click here to listen to the full interview between Missourinet news director Brian Hauswirth and Senate President Pro Tem Ron Richard, which was recorded at the Missouri State Fair in Sedalia on August 17, 2017: