You are here: Home / Business / WOW Air woos Missourians with cheap flights out of St. Louis

Beginning next May, an airline known for its international bargain flights will offer service out of St. Louis Lambert International Airport. One-way direct flights to Iceland are now available for as low as $99 and connections to major European destinations like London, Paris, Amsterdam, Berlin, Copenhagen and Dublin start at $150. Expect to pay more for each carry-on and any checked bags. 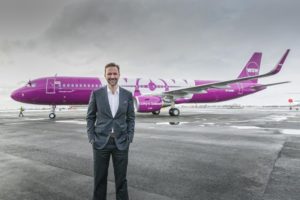 When WOW opens its gates in St. Louis, it will offer service out of Lambert four days per week.

At a press conference on Wednesday to announce the news, CEO and Founder Skuli Mogensen says he’s ready to bring more visitors to St. Louis.

“I think with those kind of prices, what we have seen is that we tend to stimulate the market significantly in both directions,” says Mogensen.

“They come here from around the world. They come to see our iconic arch,” says Ratcliffe. “They come to hear the blues and see the history of blues in our region. They come to explore Route 66. They’re already coming here. We’ve just made it easier for them to get here.”

Mayor Lyda Krewson says the airport is having its busiest summer in nearly a decade. There are 261 daily departures during this peak summer travel period.

WOW Air, which launched in 2011, has one of the newest aircraft fleets in the world. It offers services to 32 destinations in Europe and North America.