The Missouri Chamber of Commerce President is set to testify Wednesday afternoon in Springfield, before a transportation task force. 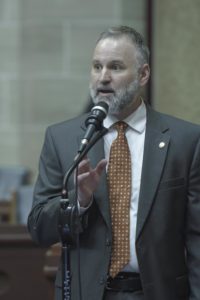 The task force, which is chaired by State Rep. Kevin Corlew, R-Kansas City, is meeting monthly and will submit a report and recommendations to the General Assembly by January 1.

Missouri Department of Transportation (MoDOT) Director Patrick McKenna testified in June that MoDOT has 1,300 “weight-restricted” bridges, along with 866 “poor” bridges.

Missouri House Transportation Committee Chairman Bill Reiboldt, R-Neosho, has said that a gas tax increase “must be on the table.” Reiboldt has mentioned a possible ten-cent increase.

MoDOT’s current budget is about $2.3 billion.

Wednesday’s meeting is from 1 to 3:30 pm at the Springfield Area Chamber of Commerce on John Q Hammons Parkway. The meeting is open to the public.

Chairman Corlew notes an hour of the meeting will be designated for your testimony about Missouri’s highway system and its funding.

Missourinet’s Jason Taylor will be covering Wednesday’s meeting in Springfield, as part of his planned series on Missouri transportation issues.