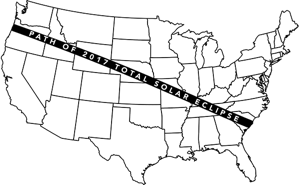 NASA will be doing play-by-play coverage during Monday’s eclipse, “Through the Eyes of NASA” — NASA Television Coverage of the 2017 Total Solar Eclipse — from the College of Charleston, SC from 12:00 p.m. – 3:00 p.m. CST

St. Joseph will be the fifth-largest city along the eclipse path and expects between 50,000 and 500,000 people on Monday. Missourinet affiliate KFEQ will shared St. Joseph’s experience before and during the two minutes and 38 seconds of totality.

Columbia/Jefferson City is along the path of totality and the state Capitol will be the site of a large public viewing.
Radio station 93.9 The Eagle will be live and local from 5:30 am through 2:00 pm that day. The focus will be 100 percent on the eclipse starting at about noon.

Radio station KMMO in Marshall, MO will broadcast live in an audio stream during before and during the eclipse.

The last total eclipse seen in Missouri was in 1869.

Previous Post: « Cardinals settle for split with Pirates after Williamsport, PA loss
Next Post: Most Missouri state offices in Buchanan and Cole counties are closed Monday because of solar eclipse »