That’s Kyle Busch’s margin of victory at Bristol this weekend, less than a second-and-a-half ahead of rookie Erik Jones, who was looking for his first career victory in NASCAR’s top series.  If Jones had won, McMurray would be seventeenth in the rankings, one spot outside the championship round.

McMurray was twelfth at the finish of the Bristol night race and remains, with Chase Elliott and Matt Kenseth, one of three winless drivers still in the running for the championship round on points.  Thirteen drivers who have wins this season are locked into the playoffs.  If either of the next two races is taken by a driver yet to win this year, one of the three winless drivers will fall out. 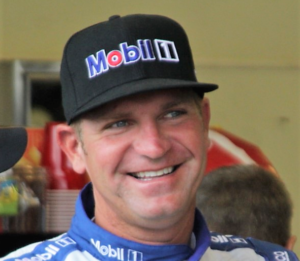 The first driver on the outside is sometime Missourian Clint Bowyer (right), who trails McMurray by fifty-eight in the overall points count.

Two races remain before the field of sixteen is set.  Teams have next weekend off before going to Darlington, “the track too tough to tame,” for a Sunday night race on Labor Day Weekend.  The final field will be set after the next race, at Richmond.

Darlington has not been a strong track for McMurray.  He was second there in 2010 but has only four other top tens in sixteen races.  Bowyer has only one top ten—ninth in 2007—in eleven races there.

(INDYCAR)— Will Power came from a lap down to hold off season points leader and teammate Josef Newgarden to win IndyCar’s 500-mile race at Pocono.   Power had dropped a lap back when he had to pit to replace a front wing on the 65th of 200 laps but a mid-race caution helped him get back on the leader’s lap and a lightning quick pit stop on lap 165 put him in the lead.  He took the final lead with ten laps to go and finished a half-second ahead of Newgarden.

2016 Indianapolis 500 winner Alexander Rossi picked up the other spot on the podium.  This year’s winner at Indianapolis, Takuma Sato, started from the pole but never led a lap and finished thirteenth.

Helio Castroneves, hoping for his first championship in what is likely his last year as a fulltime driver in the series, started twentieth after crashing during qualifying but rallied to seventh place at the end, one place ahead of Ryan Hunter Reay, who also crashed in qualifying.  Hunter-Reay was taken to a hospital after the crash for a checkup and was not cleared to drive until race-day morning.  He started dead last.

Missourians’ last chance this year to watch an IndyCar race close to home is next Saturday night at Gateway International, just across from St. Louis.  The race sort of completes a career circle for Castroneves, whose then-young career was revived in 1999 by St. Louis trucking company owner Carl Hogan, who hired him after Castroneves original team folded.  His success with Hogan led to his signing to drive for Roger Penske, for whom he has 57 poles and 30 wins, including three at Indianapolis.

(Formula 1)—Formula 1 ends its summer break next weekend with the Grand Prix of Belgium.

Previous Post: « Embattled Missouri Senator apologizes to Trump, stands by refusal to resign
Next Post: Royals get past Indians in series finale »