Missouri is one of ten states in the direct line of a total solar eclipse that will cut a diagonal path across the country Monday.  Special events are planned in all ten where the moon will completely block the sun for a time span ranging from 20 seconds to more than two-and-a-half minutes. 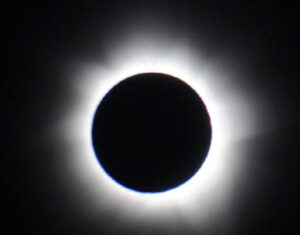 State agencies in Missouri have spent months planning for what amounts to an once-in-a-lifetime event for many people.  A 60 mile wide band stretching from St. Joseph to St. Genevieve will bring total darkness along a line known as the “path of totality”.

The Missouri Division of Tourism has projected an influx of anywhere between 320,000 to 1.3 million visitors to the state.  Matt Hiebert with the Department of Transportation (MoDOT) says the northwest portion could see more travelers than other areas.

“A lot of them are coming from Iowa, Minnesota” said Hiebert.  “I know that they’re looking at St. Joseph to get a better view.”

Southeast Missouri could be spared from severe traffic congestion because of a major event planned in Carbondale, Illinois.  Hiebert says (MoDOT) is working with a coalition of departments under the State Emergency Management Agency (SEMA) in preparation for the eclipse.

“Tourism is one of those.  Highway Patrol.  Of course SEMA, (Department of) Conservation, DNR (Department of Natural Resources).  We’re trying to get all of our actions and our messages coordinated, so people can have a safe and enjoyable experience of this event.”

The Missouri State Highway Patrol is recommending for vehicle travelers to plan in advance, get to their destination early and let traffic thin afterward before trying to get home.  The Patrol’s Captain John Hotz says anyone driving during the event should remember to turn on their headlights and watch the road, not the eclipse.

“Don’t try to videotape it or watch it as you’re driving down the roadway” said Hotz.  “Certainly don’t wear the eclipse glasses while you’re traveling down the roadway.  With all the additional traffic out there – pedestrians, bicyclists, whatever the case may be, you need to be focused on driving.”

The Highway Patrol also advises travelers to have a full tank of gas and plenty of water and snacks and games for kids in case they get caught in traffic.  Five interstate highways in Missouri fall in to the direct line of the solar eclipse (29, 35, 44, 55 and 70).  Mike O’Connell with the Department of Public Safety thinks it’ll be especially important for travelers to avoid rushing to highways right after the event.

“It’s just like a ball game or a fireworks display in St. Louis” O’Connell said.  “Why leave after that last display goes off at the fireworks show.  Stick around a little bit.  Enjoy some time.  Have a plan.”

The Department of Public Safety is preparing for weather events such as extreme heat and severe storms that can occur in Missouri during August.

Overall, the state has been planning for several months to absorb an inflow of visitors.  SEMA Director Ernie Rhodes notes coordination has been made with local and non-governmental partners on response. “We’ve identified resources” said Rhodes.  “We have plans, contingency plans, to support regions that may have a large population surge.”

Jefferson City, the state capitol, is expecting 50,000 visitors Monday as it’s near the dead center of the path of totality.  It’s also hosting the “Capitol Eclipse Celebration” that’ll include a live broadcast by NASA and the space agency’s “Journey to Tomorrow” traveling exhibit.

MoDOT Central District spokesperson Gene McCoy says Jefferson City Police are closing the pedestrian walkway on the city’s Missouri River Bridge from 12:30 p.m. to 2 p.m. Monday while the eclipse takes place.  “It’s just a lot of people in a small confined space and pedestrian congestion and things like that” McCoy said.  “They just didn’t want to face those types of security and safety concerns.  That’s a lot of folks.”

No Missouri city has anticipated the eclipse and made more preparation for the event than St. Joseph in the northwest side of the state.  Beth Conway with the visitors bureau in St. Joseph says a number of factors have led to estimates of up to 500,000 visitors crowding into the city.

“We have the infrastructure to accommodate lots of people, not quite that many people, but a lot of people” Conway said.  “We sit on two major interstates.  We’re only 30 minutes away from the international airport in Kansas City.  And historically here in northwest Missouri, that time of the year we’ve got clear skies.”

Although hotels are 99% booked in St. Joseph, Conway says the biggest stream of visitors will be from family members and friends.  “People are hosting hordes of family and friends, like five, 10, 20 people at some locations.  We’ll never truly have a grasp of how many people are in town, but we know traffic will be very, very dense for sure.”

Conway adds that University of Missouri Astrophysicist Angela Speck, who has done extensive research on the eclipse, is predicting well over half a million visitors to St. Joseph.

O’Connell with the Department of Public Safety says St. Joseph has developed a reputation in the region for its thorough preparation.  “I believe that they’ve been asked to consult with some other communities too that didn’t get as early a start.  And I believe that St. Joseph really thinks that they’ve got a robust response plan.”

Around the state, O’Connell says businesses and local governments are making adjustments for the possibility of dense traffic Monday.  “People who do deliveries and trash collections and what have you, they are aware of this eclipse.  They’ve been making plans for weeks and months in some cases.”

O’Connell notes some cities are having trash collections at 3 a.m. or 5 a.m. to avoid traffic issues, while agriculture deliveries are being delayed until Tuesday of next week.

The Department of Public Safety has a Facebook page offering advice for those planning to watch the eclipse while MoDOT has an online map with up to the minute traffic conditions.