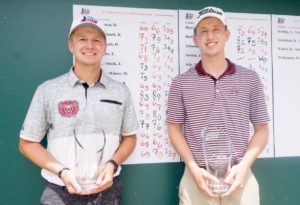 The Missouri Golf Association hosted the final round of the 2017 Men’s Four Ball Championship Sunday at the Dalhousie Golf Club in Cape Girardeau, Missouri.

Missouri State Bears’ golfers Kory Franks of Jefferson City and Brad Carpenter of Washington took the first place title today in the Championship Flight. The partners came out on top with an impressive overall score of 128 (65-63). Franks and Carpenter kicked off the day with one eagle, two birdies and five pars on the first eight holes and double bogeyed on the ninth. Their turning point came on the back nine when they managed to birdie the final six holes to earn the first place ranking.

Chad Niezing and Chris Dale took second place with an overall score of 130. The team was tied for first after round one with a 64 but fell short of the first place ranking after shooting a 66 today. They had 15 birdies, 20 pars and one bogey to complete the weekend.

Tony Gumper and Ryan Eckelkamp were also tied for first after round one but claimed third in the Championship Flight after carding a 67 today. Their overall score was 131. Gumper and Eckelkamp finished with one eagle, 12 birdies, 22 pars and one bogey.

In the Net Flight, David Eddy and Alexander Kanakis took the first place title with their overall score of 123 (63-60). The team had an eagle, four birdies and four pars on both the front and back nine.

Tom Dillon and Ron Uelk came in second after scoring a 62 today and 64 yesterday (126). They earned three eagles, 15 birdies, 15 pars and three bogeys between both rounds.

There was a tie for third place in the Net Flight between Kevin Long and David Diemer and Jay Higgins and Matthew Schnieders with a 130. Long and Diemer scored a 64 during round one and a 66 today while Higgins and Schnieders carded a 63 and 67.