(NASCAR)—Joplin Native Jamie McMurray’s ninth-place finish at Michigan keeps him in the running for a spot in NASCAR’s ten-race playoffs that begin after just three more races.

McMurray ran in the top ten almost all day.  Teammate Kyle Larson got a great jump on the last restart and beat overall points leader Martin Truex Jr., to the finish line.  It was Larson’s third straight win at Michigan and his third race victory this year. 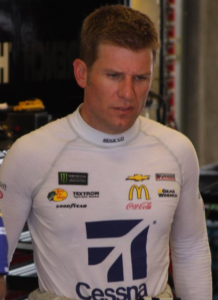 McMurray remains one of three winless drivers competing for the last playoff spots in the sixteen-driver competition.  Thirteen race winners are guaranteed playoff slots.  Chase Elliott, McMurray, and Matt Kenseth, who are 7, 8, and 9 on the overall points list, are14, 15, 16 on the playoff list.

Sometime Missourian Clint Bowyer is the first driver on the outside looking in.  He was running well at Michigan until his car incurred right-front damage on a restart that forced him to pit for repairs and a new tire, dropping him well back.  He finished twenty-third, one spot ahead of Kenseth, who was third on the last restart but dropped far back when a tire went down in the last two laps.  Those misfortunes leave McMurray with a twenty-one point cushion on Kenseth, and a fifty-two point advantage on Bowyer, who is seventeenth in the playoff standings.  Well behind all of them is Joey Logano, who won a race earlier this year.  But his victory does not count in the championship standings because his car flunked a post-race inspection. 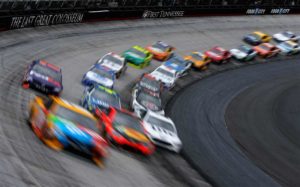 The next three races that will set the sixteen-driver field for the championship playoff will be a night race next Saturday at Bristol (right), the Southern 500 at Darlington, and a 400-mile race under the lights at Richmond on Saturday, September 9.  If either Elliott, McMurray, or Kenseth win one of those races, they’re automatically in the playoffs.

(INDYCAR)—Oriol Servia and Juan Pablo Montoya have run their third series of tests on the new aero kids that will be the shape of IndyCar in 2018.  The latest round was on the short oval at Newton, Iowa.  The two tested the kids at various downforce levels on the .894 banked oval as IndyCar looks for the best competitive system for next year’s races. One more round of tests will be held at Sebring, simulating street racing conditions.

Regular racing resumes next weekend at Pocono, one of four races left on the schedule.  One of them will be on the new surface of Gateway Motorsports Park, just across the river from St. Louis.

(FORMULA 1)—F1’s summer break still has a couple of weeks to go.  Next on the schedule is the Belgian Grand Prix on the Spa-Francorchamps circuit on the 25th.

F1’s spin-off series, Formula E, is getting a major boost from three big names.  Mercedes says it will enter a team in the all-electric series in 2019.  Porsche says it will field a team, too. They will join three other major names already in the series—Renault, Jaguar, and Citroen. Audi backs a team and Andretti Autosport from the USA fields a team. Also on the grid this year is a team fielded by Mahindra, which calls itself the “World’s #1 seller of tractors.”

Previous Post: « Chiefs move up Mahomes to number two on the depth chart
Next Post: Deadline is today for Missouri residents to apply for disaster relief »