The plot thickens.  After “Rally cat” twinkle toe’d its way past Lorenzo Cain into the centerfield before being scooped up a brave member of the Cardinals grounds crew, Yadier Molina delivered a grand slam off Royals relief pitcher Peter Moylan.  After the game manager Mike Matheny said someone had stepped forward to claim the kitty…now the cat is missing!

The Cardinals released a statement on Thursday afternoon.

As everyone observed during last night’s game, Lucas Hackmann, a member of our grounds crew, secured the stray cat in the outfield and exited the playing surface at the left field gate and walked up towards the main concourse at Gate 3.  He then let the cat down outside of Gate 3 near the Stan Musial statue and went immediately to first aid to attend to his scratch and bite injuries.  At that point, as our ushers tried to contain the cat, a fan grabbed it and claimed it was hers.  As she left the ballpark, our security team caught up with her and asked her some questions.  She then abruptly left with the cat.  We understand from media accounts that the woman intended to take it home and care for it, but lost track of it in City Garden.  We are hopeful someone will find the cat and contact us so we can properly care for it.  Our grounds crew is working on developing a stray animal protocol to ensure the safety of both crew and animal should this happen again.  In the meantime, the Cardinals are looking to scratch and claw their way back to the top of the division standings. 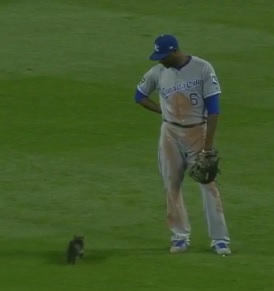