The third in a series of monthly hearings on the state’s roads and bridges will take place August 23rd in Springfield. 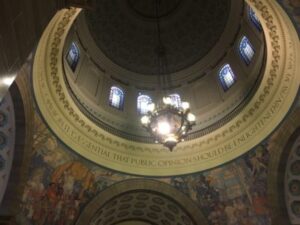 The Missouri Legislature created the 21st Century Transportation System Task Force in 2017 after numerous failed efforts to boost highway funding over the years.

In August of 2014, voters rejected a proposal by lawmakers for a constitutional amendment that would have increased Missouri’s sales tax by three-quarters of a cent for 10 years. Republican Bill Reiboldt of Neosho, who chairs the House Transportation Committee, thinks the measure failed because it wasn’t backed by then Democratic Governor Jay Nixon.

“I think the largest reason is because the governor didn’t support it,” says Reiboldt. “In fact he worked against us, Governor Nixon. And if he had come out and said ‘Hey guys, why don’t get together. We all know we have a problem.'”

The tax boost would have raised an estimated $5.4 billion over its lifetime, with 10% of the additional revenue going to local governments.

Reiboldt wants the task force to consider all options for raising funds for roads.

The Missouri Department of Transportation (MoDOT) has identified $825 million in additional money needed every year to address roads in its “Citizen’s Guide to Transportation Funding”.

Broken down, the expenses include $170 million to maintain roadways, $275 million in economic development and safety projects, $300 million to reconstruct interstate highways, and $80 million to improve mobility options.

He thinks the group should consider all methods of funding roads, including tolling and raising auto licensing and registration fees. But he would prefer to generate money by increasing the motor fuel tax.  Reiboldt want to hike the tax by 10 cents a gallon, saying it would bring Missouri in line with recent moves by neighboring states.

“We haven’t had a fuel tax increase in some twenty-one years. We have not stayed up with inflation. And I feel like now is the time to raise just a modest increase,” says Reiboldt.

According to Reiboldt, every penny added to the fuel taxes generates $38 million to $40 million. Hiking the tax by 10 cents would raise an additional $400 million and $450 million a year.

It was last increased by 6 cents in 1996, as part of a bipartisan 1992 agreement by former Governor John Ashcroft (R) and a legislature controlled by Democrats.

Tom Crawford, President and CEO of the Missouri Trucking Association, says his membership favors a fuel tax hike of up to 15 cents a gallon.

“It was pretty bold,” says Crawford. “It wasn’t universal. The higher you got, the less universal it was among my membership. But it was fairly well supported up to 15 cents.”

Some lawmakers are questioning the wisdom of relying on gas taxes to finance roads.

Republican Senator Bill Eigel of Weldon Springs is also a member of the Transportation Task Force.  Noting that average fuel efficiency has dramatically improved over the years, he thinks the fuel tax will have diminishing returns.

Crawford contends the levy is still a viable option. “You’ll hear a lot of people at these task force (hearings) talk about needing to move on to another system. I get that, in the 30-to-40 year time frame.  But Missourians haven’t made an investment.  We haven’t done a fuel tax increase since the 90’s, and we haven’t voted on one since the late 80’s,” says Crawford.

Reiboldt thinks the ten-cent fuel-tax hike is a more realistic option than 15 cents, conceding that the MoDOT target to boost funding by $825 million per year could be difficult to achieve.

“If we could come up with $400-$450 million and work in a positive direction, and make sure that MoDOT is spending every dollar wisely,” says Reiboldt.

Some lawmakers and residents contend any increase in the fuel tax should be shouldered by the trucking industry because semis often travel through the state without refueling within its borders.

Crawford says the assumption is a common misconception, noting the International Fuel Tax Agreement requires truckers to pay for diesel costs in all states.

“You could fuel up in Missouri, drive all the across Kansas in to Colorado, and fuel up in Colorado. You’re are still going to pay fuel tax in Kansas at the end of the quarter, based on the miles you drove in Kansas,” he says.

The task force is dealing with an arrangement that makes it difficult to close the gap in road funding. The state maintains the many lettered highways that are classified as county roads. As a result, Missouri has the nation’s seventh largest state highway system to manage, while it ranks 47th in revenues per mile.

The task force plans to meet once a month, and will submit a report and recommendations to the Legislature by January 1, 2018.