A two day search tracked down the man suspected of killing a western Missouri police officer on late Sunday night.  Ian McCarthy was located by a state trooper after being spotted by a driver passing by near a resort on Truman Lake close to western-Missouri’s Clinton. 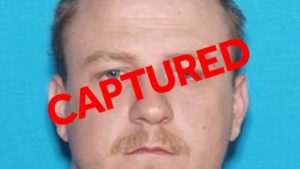 Dozens of law enforcement officers had been searching the Clinton area for McCarthy since the incident.  A Tuesday afternoon SWAT operation at a home 22-miles away in Chilhowee came up empty handed.

“This just goes to the statement I made yesterday that Officer Michael was heroic to the end” said Lowe.  “Even sustaining a fatal gunshot wound, he was able to return fire.”

McCarthy was taken to a hospital in Kansas City last night in stable condition.  Shortly after the Sunday night incident, McCarthy crashed and disabled the vehicle he was driving, possibly the result of the wound he received from Michael.

Sgt. Lowe said it’s not known yet if McCarthy was aided by any other persons in sustaining himself for the two days following the shooting.

“That’s part of the process that we’re going to go through, is to figure out how he got to where he was.  Did he have any help?  That’s an investigation that’s going to continue.”

McCarthy was taken into custody without incident shortly after 6:15 Tuesday evening.  A number of vacant properties in Clinton were searched the previous day where it was thought McCarthy could have been hiding.

McCarthy has a lengthy criminal past. He has a felony warrant out for unlawful possession of a firearm in July of 2015 in Johnson County, Kansas. He also has an active first degree assault warrant in New Hampshire.

McCarthy has been associated with 20 criminal violations there between 1997 and 2011. A 2001 felony first-degree assault charge resulted in a prison sentence after a jury convicted him of stabbing a child several times in the neck.

Michael, who had been on the force less than a year, is the first Clinton police officer killed in the line of duty. He served in the armed forces prior to joining the Clinton Police Department.

An impromptu observance was planned for 10 a.m. Wednesday as residents were to line the streets to pay respect when Officer Michael’s was returned to Clinton.

A candle light vigil has been set to take place Wednesday night at 8:30 at The Henry County Court House in Clinton.

Visitation will be held Friday from 6 pm to 9pm at Vansant-Mills Funeral Home in Clinton.  A second public viewing will be held at the Benson Convention Center in Clinton from 9:00am to 11:00am Saturday.

Michael’s funeral will be held on Saturday at 11:00 am at the convention center.

Previous Post: « Andy Reid will give every player a look in this first preseason game. No guarantees after Friday
Next Post: Missourinet 7 a.m. News 8-9-2017 »