You are here: Home / Agriculture / Missouri House Speaker: “We’ve got to make sure” Mizzou is the strongest University it can be

House Speaker Todd Richardson says Missouri lawmakers are hopeful that they’re going to see “the kind of strong, vibrant University of Missouri that people in this state deserve and expect.” 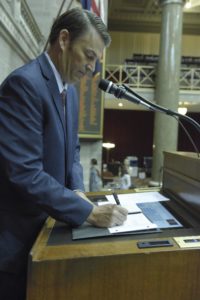 “The University of Missouri is an incredibly important asset to Missouri and we’ve got to make sure that it’s the strongest university it can be,” Richardson says.

Richardson, R-Poplar Bluff, spoke to Missourinet Moberly affiliate KWIX Radio (AM 1230) during a recent stop in the northern Missouri community.

Richardson, Cierpiot and Redmon are in their fourth and final House terms. They were elected to the House in 2010.