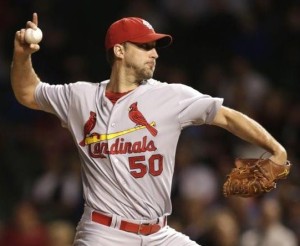 Two big innings propelled the St. Louis Cardinals to a 13-4 pounding of the Cincinnati Reds in the series finale Sunday.

After falling behind 3-0 after the first inning, St. Louis exploded with four in the top of the second and then nine in the fourth inning.

Jose Martinez had the big blast in the fourth, his first grand slam. St. Louis sent 13 batters to the plate for nine runs in the fourth, matching its biggest inning of the season.

The Cardinals overcame a rough outing from starter Adam Wainwright, making his return from the DL with a stiff back. Wainwright threw 39 pitches before retiring a batter in the first but was able to get out of a based loaded jam to only allow the three to score. Wainwright left after three innings and 88 pitches.

Brett Cecil notched his second win of the year allowing three hits without a run in three innings for the win.

The Cardinals took two of three in the weekend series.