(Mid-Ohio Sports Car Course)—IndyCar is seeing how its new aero kits work on a road course today, with test drivers Oriol Servia and Juan Pablo Montoya in the cockpits for the second test session of the new design.

The testing is overseen by the series’ Competition President Jay Frye, a former Missouri Tiger football player.  He says the first tests, at the Indianapolis Motor Speedway last week went so well that a second day of running was called off.  We talked to him after the first tests at Indianapolis—about the new design AND about memories of spending August on the football training field at Mizzou.

The two engine manufacturers who compete in IndyCar have slightly different designs in their present cars.

Tony Kanaan finished fifth in the Indianapolis 500 in May in this Honda-powered car. Kanaan, who won the race in 2013, was driving a car that had begun using the present aerodynamic design in 2012.

Will Power’s day in his Chevrolet-powered car ended early in the 500 when he was involved in a crash with Servia and two other drivers left him 23rd.  Nobody was hurt in the crash.  Drivers Sebastian Bourdais and Scott Dixon survived two horrible incidents, one in the race and the other on pole qualifying day, and the design of the present car was considered a contributing factor. 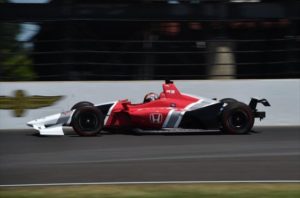 But next year, they’ll be running with the new body shape.  Here’s the car as it is likely to look for Honda drivers, although some tweaks might be made after the testing. 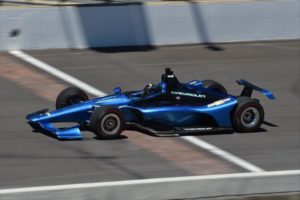 The Chevrolet-powered car tested by Montoya at the Speedway had no differences. Cars that will run on high-speed, banked ovals and the cars that will run on street circuits will be somewhat different because of downforce and other aero requirements.

The new designs will get their first competition test next March 11, in the season opener on the streets of St. Petersburg, Florida.

Indycar doesn’t race again with the current designs until August 20th, on the big triangle at Pocono, in Pennsylvania.  After that, there will be only three more races this year, one of them at Gateway Motorsports Park, just across the river from St. Louis on August 26—a Saturday night race.