A lawsuit led by the American Civil Liberties Union (ACLU) against Missouri’s new photo voter ID law will have a hearing in September. 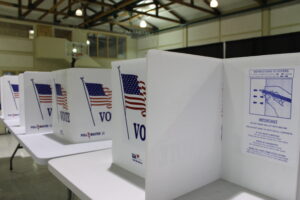 The suit, filed in Cole County Circuit Court in Jefferson City, claims the state hasn’t adequately provided education, poll worker training or funding for ID’s the law calls for.  Daniela Velazquez with the ACLU of Missouri says that voters’ right are under threat.

“This lawsuit is really about ‘Can Missouri really implement this law that they said they were going to do without putting the voters of Missouri at risk for being able to vote” said Velazquez.

When the lawsuit was filed in the second week of June, the ACLU had hoped a judge would issue a temporary restraining order to block the law before two local special elections took place – one in southern Missouri’s New Madrid, and the other in St. Louis city.  The judge declined to do so.

“You have to prove irreparable harm before the law goes into effect, which is really, really difficult.  What actually happened in North Carolina and Wisconsin is that the lawyers also tried to do that, and they didn’t get that temporary restraining order.  And, of course afterward, it was found that these laws did cause irreparable harm.”

In striking down the North Carolina statute, the judge cited it for intentional suppression of African American votes.

Missouri’s Republican Secretary of State Jay Ashcroft ran on a platform promising a strong photo voter ID law.  The new statute is a state constitutional amendment that was promoted by the GOP and approved by 63 percent of Missouri voters last November.

It requires voters to have a government issued photo ID, such as a driver’s license, passport or military identification.  People presenting other forms of ID previously allowed in Missouri, including voter registration cards, college ID’s and bank statements, are still given a normal ballot if they sign a statement.

The statement says the voter acknowledges they don’t have the government issued photo ID, and informs them that they can get one at no charge.

Those presenting no ID are allowed to vote with a provisional ballot.  Those votes will be counted if their signatures match up with their voter registrations.

The ACLU lawsuit notes Secretary Ashcroft asked for $5 million to cover costs for enacting the law but was only allocated $1.5 million by the legislature.  Ashcroft says the money provided has been sufficient and adds that there are provisions to deal with any shortage of funding.

“The money that was appropriated looks like it’s going to be just fine for meeting the request for documents,” said Ashcroft.  “We have assurances from the legislature that if for some reason those requests for documents ramp up and we need more money, they will make sure that we have additional resources as necessary.”

33 states, mostly led by Republican Governors and legislatures, have enacted some form of a voter ID law in recent years.  Most were put in place after GOP lawmakers argued there was a need for protection against voter fraud.  Ashcroft is adamant that the phenomenon exists and is a problem.

“I know firsthand from talking to special prosecutors, from talking to county officials about prosecutions that they’ve had, that we’ve had double-digit occurrences of vote fraud in the seven months that I’ve been Secretary of State.”

The ACLU’s Velazquez says voter ID laws are intended to prevent voter impersonation and contends there are no cases of such a violation in Missouri.  “We have not seen a case of voter fraud in Missouri that I’ve seen.  I’m curious to see how many the secretary of state’s office is investigating, because we haven’t seen any instances here.”

Ashcroft vehemently denies the statute Missouri has in place has had any negative impact on voting numbers.  “Not a single individual has been able to be pointed out to me that would not be able to vote under Missouri’s law.  Not a single one.  Because we wrote this law to make sure that if you’re a registered voter, you can vote.”

Velazquez counters that it’s too early to tell if voting has been hindered by the law because there have been no elections with large numbers of citizens taking part.  “It’s likely that there will be people affected.  And it’s likely that we don’t know about it now, because it hasn’t happened yet.  It hasn’t caused the harm that it will likely cause.”

She also contends the laws in Wisconsin and North Carolina were tossed out after elections when they were shown to cause irreparable harm.

The next scheduled hearing for the ACLU lawsuit challenging the voter ID law is August 1st in Jefferson City.