Missouri’s 4th District Republican Congresswoman is a fan of President Trump’s decision to ban transgender service in the armed forces. 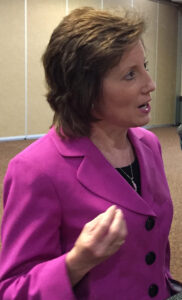 Vicky Hartzler pushed an amendment in the U.S. House this month that would have banned defense dollars from going to medical treatment tied to gender transition. It barely failed to pass.

“I was very pleased that the President took the decisive actions he did to ensure that every defense dollar is going to be able to address the threats that we are facing as a nation.”

Hartzler claims the medical treatment required for gender transition is costing the military too much money.  “We’re going to focus every dollar to making sure that you as a soldier come home safely and are able to fight and win wars.”

Opponents of her legislation and Trump’s order have been quick to point to a study showing the maximum annual medical costs for transgender services would be around $8.4 million. By contrast, the Military Times reports that the military spent $84 million on erectile dysfunction medications Viagra and Cialis in 2014.

Defense Secretary Jim Mattis had worked behind the scenes to keep Hartzler’s amendment out of legislation, lobbying Republican lawmakers not to attach the prohibitions.

The President’s decision has also divided military veterans in Congress.  One camp is standing squarely behind the president while the other is calling his order an ugly attack on dedicated troops.

Democratic Senator Tammy Duckworth of Illinois, a former Army helicopter pilot who lost her legs and partial use of her right arm during the Iraq war, called Trump’s announcement discriminatory.

She says she didn’t care if the troops who risked their lives to help save her were gay, straight, or transgender.  She says, “All that mattered was they didn’t leave me behind.”

It”s been speculated that Trump imposed the transgender ban for purely political reasons. The military spending plan being held up by Hartzler’s amendment includes money to build a wall on the U.S. border with Mexico. The wall was a centerpiece of Trump’s 2016 presidential campaign.

Ina statement, Whiteman Air Force base in Knob Noster said “the Air Force does not have any numbers to provide at this time regarding transgender service members or those seeking treatment”.  Fort Leanord Wood Army base army base spokesperson Shatara Seymour said “Fort Leonard Wood implements the personnel policies issued by the Department of Defense, the Department of the Army and our higher headquarters. We have not received any changes in personnel policy about transgender military personnel.

Both military installations are located in Hartzler’s 4th congressional district.