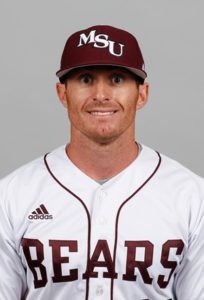 A two-time All-Missouri Valley Conference honoree during his MSU playing career, Lawson will serve as MSU’s lead hitting instructor and recruiting coordinator after filling a variety of roles on the Bears’ staff over the last four seasons. He joins assistant (pitching) coach Paul Evans on MSU’s full-time staff for the 2018 campaign, which will mark Guttin’s 36th year as the Bears’ bench boss.

“We expect Matt to bring the same things to our program as a full-time assistant that he did as a player, volunteer assistant, graduate manager and student assistant,” Guttin stated. “He is fiercely loyal to Missouri State and  possesses a great work ethic, as well as a tremendous ability to connect with our student-athletes.”

Lawson has served as a volunteer assistant and student assistant coach, as well as a graduate manager since his return to his alma mater, playing a pivotal role in one of the most successful stretches in Missouri State baseball history while working with the Bears’ hitters and infielders. Over the last three seasons alone, the Bears have claimed two MVC regular-season titles, as well as two of the program’s three NCAA Super Regional berths with Regional crowns in 2015 and 2017, while racking up 130 overall victories—the best three-year win total in the 54-year history of the program.